Pumpkin Spice Health Benefits: Weight Loss to Heart Health, Why This Fall-Special Aromatic Mix Is So Good For You!

Come autumn and everything from pies to lattes to cookies is flavoured with pumpkin spice, and honestly, nobody is complaining. Since it is made with some awesomely nutritious ingredients, pumpkin spice also has some mean health benefits. Use it the right way, and it does your body a lot of good. If you are curious to find out, stick around. 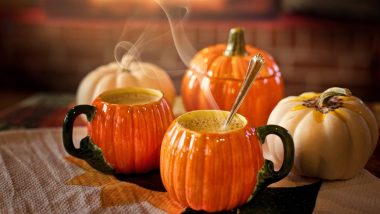 It’s fall season, and we love us some pumpkin spice already! A heady mixture of cinnamon, nutmeg, ginger, clove and, well, pumpkin, this spice medley is the flavour of the season (pun intended) every fall. Come autumn and everything -- from pies to lattes to cookies -- is flavoured with pumpkin spice, and honestly, nobody is complaining. Since it is made with some awesomely nutritious ingredients, pumpkin spice also has some mean health benefits. Use it the right way, and it does your body a lot of good. If you are curious to find out, stick around.

Traditional pumpkin spice is made of cinnamon, nutmeg, ginger, cloves and allspice powder, but no pumpkin despite what the name suggests. The spice mix was traditionally used to flavour pumpkin pies in autumn, which explains its nomenclature. It has a distinctly warm and sharp taste of the spices coupled with a woody aroma. And we clearly can’t get enough of it. So how is exactly is it healthy? Let us count all the ways. Pumpkin Health Benefits: 7 Reasons Why the Fruit Is More Than Just a Jack-o-Lantern for Halloween.

The thing that unites ginger, nutmeg, cinnamon, cloves and allspice is their fat-burning properties. Ginger has been proven to reduce hunger and promote calorie burn. Nutmeg has manganese, which breaks down fat and cholesterol. Cinnamon and clove aren’t too far behind with their fat-blasting effects. However, if you must have pumpkin spice with a creamy cup of latte topped with whipped cream and sweetened with heaps of sugar, say goodbye to all its weight loss benefits. Amazing Health Benefits of Ginger You Didn't Know About.

The combined goodness of ginger, cloves, nutmeg, cinnamon and other spices is unparalleled. Pumpkin spice has antioxidants like gingerol, polyphenol and eugenol, which reduce oxidative stress and free-radical damage. In so doing, it keeps your immune system active and your heart healthy.

Ginger in pumpkin spice works as a powerful anti-nausea agent. Nausea can be caused by a variety of factors, some of which include pregnancy, medication or motion sickness. Add a teaspoon of pumpkin spice into water and bring it to a boil. Sip on this brew if you want to keep the sensation down.

Cinnamon, nutmeg and clove in pumpkin spice mix work extra hard to reduce blood sugar levels. In moderate quantities, using the mix to spice up your coffee, tea or morning bowl of oatmeal works wonders for those who struggle with type 2 diabetes. But like we told you earlier, don’t expect the same results if you go to town on a pumpkin spice-spiked pie. Cinnamon for Weight Loss: This Week’s Home Remedy Will Show You Ways to Use the Spice to Burn Fat.

Spices like cinnamon, clove, allspice, nutmeg and ginger have strong antimicrobial qualities. Consuming pumpkin spice daily can help ward off the pathogens that cause gastric troubles. It can also curb fungal growth in the body. If you have a pesky pimple on your face, a tiny portion of pumpkin can be mixed with honey and applied for a quick spot treatment.

With its anti-inflammatory and cholesterol-busting qualities, pumpkin spice mix is an elixir for heart health. By lowering blood sugar and blood pressure, it also improves vascular functions.

Pumpkin spice mix works best if it is not lost in layers of cream and sugar. Which means, you have to use it as a part of a healthy diet. You can have pumpkin spice with your morning cup of coffee sans the sweeteners and cream. Use it to spike your morning breakfast of oats or porridge. You can also use it to flavour honey, a spoonful of which makes for an excellent pick-me-up.

(The above story first appeared on LatestLY on Sep 23, 2019 07:43 PM IST. For more news and updates on politics, world, sports, entertainment and lifestyle, log on to our website latestly.com).