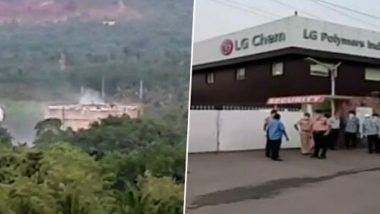 Visakhapatnam, May 7: A tragic incident took place in the wee hours of Thursday where eleven people died and several others were rushed to the hospital following an accidental gas leakage from LG Polymers plant in Vizag. The neuro-toxic gas Styrene leaked from Korean company LG Polymers around 3 AM on May 7 from the plant in R R Venkatapuram.  The maximum impact of the gas leak was felt in about 1-1.5 km but the smell spread to about 2-2.5 km.

Fear and panic gripped the village after people complained of burning sensation in eyes and breathing difficulties as the strong stench of the gas enveloped the entire area. The plant was shut since late March due to coronavirus lockdown. 8 Dead in Styrene Gas Leakage at LG Polymers Industry, PM Narendra Modi Holds Meeting With NDMA.

Urging the residents to stay indoors, Greater Visakhapatnam Municipal Corporation tweeted early in the morning: "There is gas leakage identified at LG Polymers in Gopalpatnam. Requesting citizens around these locations not to come out of houses for the sake of safety precautions." Styrene Gas Leak in Vizag: What Is Styrene? What Is Its Effect on Human Health? Know All About This Poisonous Gas.

Factory Was Supposed to Open on Thursday:

Andhra Pradesh DGP Damodar Goutam Sawang informed that the factory was following all protocols. However, an investigation is underway to find out why the tragic incident happened. Forensic teams have been sent to the spot.

#VizagGasLeak is an accident. They were strictly following all protocols. Investigation underway. Forensic teams are also being sent to the spot: Andhra Pradesh DGP Damodar Goutam Sawang. pic.twitter.com/SCLTeRoWR4

Eleven people have died and more than 800 people have been shifted to the hospital after they complained of breathlessness and vomiting due to the gas leakage.

In view of the tragedy, Prime Minister Narendra Modi called a meeting of National Disaster Management Authority officials. He further took to Twitter and said that the situation is being closely monitored and prayed for everyone's wellbeing in Vishakhapatnam.

Amit Shah tweeted: "The incident in Visakhapatnam is disturbing. Have spoken to the NDMA officials and concerned authorities. We are continuously and closely monitoring the situation. I pray for the well-being of the people of Visakhapatnam."

Chief Minister YS Jagan Mohan Reddy leaves for Visakhapatnam. He will be visiting King George Hospital where the affected persons are being treated.

President Ram Nath Kovind expressed his condolences to the families of the victims in the Vizag gas tragedy. Taking to Twitter, he said he is extremely sad by the news of the gas leak in a plant near Visakhapatnam which has claimed several lives. President Kovind further prayed for the recovery of the injured and the safety of others.

State Industries Minister MG Reddy said the company managing the chemical plant-LG Polymers, has to be responsible for gas leak mishap. Reddy said that the LG Polymers has to explain the reason behind the mishap and what all protocols were being followed. The Minister said accordingly, criminal action will be taken against them

Andhra Pradesh Chief Minister Jagan Mohan Reddy announced Rs 1 crore as compensation to the family members of the deceased. In addition to this, he also said that Rs 25,000 would be given to everyone admitted to the hospital.

(The above story first appeared on LatestLY on May 07, 2020 01:13 PM IST. For more news and updates on politics, world, sports, entertainment and lifestyle, log on to our website latestly.com).