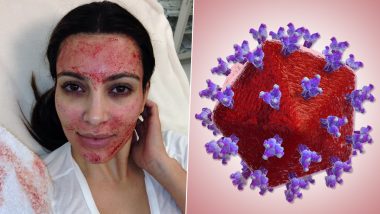 When Kim Kardashian shared a selfie on her Instagram of her face covered in blood, people showed huge interest in the spa treatment—Vampire Facial. Many celebrities are fans of the facial, which boasts big-time results. However, it created a controversy when two people in 2018 and 2019, was tested positive for HIV for trying the procedure at a New Mexico beauty salon. After investigation, the former owner was reportedly indicted on 24 felony charges including practicing medicine without a license. The indictment further accused the owner of violating health codes and continuing to offer procedures she was not licensed to administer even after the authorities told her to stop.

Maria Ramos de Ruiz, former owner of VIP Beauty Salon and Spa was charged with racketeering fraud, practicing medicine without a license, money laundering, and more. The case came into attention in August 2018, after a complaint by a newly HIV-infected person who had visited the spa for a vampire facial, popularised by Kim K, who later expressed regret for what she described as a very painful experience.

Media outlets reported at the time that when investigators visited the spa, they found a horror space of unsanitary conditions, including dirty needles, blood dumped in a kitchen sink, and more. Ramos de Ruiz had a cosmetology license, but it expired in 2013. Health officials closed the salon in September 2018. The following year, a second client was tested positive for HIV.

Procedures noted that about 137 clients allegedly received ‘unlicensed and fraudulent services’ from Ramos de Ruiz. She allegedly charged $100 for the vampire facial procedure. The officials also discovered fake certificates for Botox and ‘vampire facial’ training hanging on the wall and a fake diploma from the University of Phoenix.

The procedure for vampire facial involves extracting blood from the patient and using a centrifuge to separate regenerative platelet-rich plasma. The skin is subjected to microdermabrasion, before being covered with a mask made of PRP. Experts say that the procedure is safe when conducted properly by qualified and licensed medical providers.

(The above story first appeared on LatestLY on Apr 24, 2021 09:08 AM IST. For more news and updates on politics, world, sports, entertainment and lifestyle, log on to our website latestly.com).