Miss World 2019: Check Out List of Past Miss World Winners From India While We Cheer For Suman Rao to Bring The Crown Home! 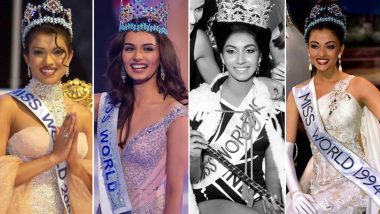 Miss World pageant is going to take place on Saturday, December, 14, in ExCeL London in the United Kingdom and Suman Rao, also known as, Suman Ratan Singh Rao is going to represent India in the contest. The Indian model, pursuing CA and Miss India World beauty pageant title-holder who was crowned Femina Miss India on June, 15, 2019. The hopes of Indians are high and we cannot wait for Suman Rao to bring the Miss World crown back home. Indian contestants have had a great record when it comes to winning the prestigious Miss World title. Miss India World 2019 Suman Rao: 5 Things About the Beauty Queen You Didn't Know Of! (Watch Video).

The pageant has given us Indian global icons such as Priyanka Chopra and Aishwarya Rai. Ever since the Miss World competitions began, 36 countries have won the title. India has won the coveted title six times. Here's a list of past Miss World winner from India:

Reita Faria was the one who became the first woman from India to win the Miss World Crown. It has already been 51 years when she brought the crown to India. Faria beat 65 other contestants to win the crown. She was also the first Asian woman to become Miss World. Faria later pursued a degree in medicine and became a practising doctor.

After 28 years of Reita Faria winning the Miss World crown for India, the blue-eyed 21-year-old beauty, Aishwarya Rai became India’s next Miss World in 1994. She was pursuing architecture at that time and in the same year when Sushmita Sen won the Miss Universe title for India. Apart from being a successful Bollywood actor, Aishwarya Rai Bachchan was the first Indian actress to join the jury panel at the Cannes Film Festival.

Stunning Diana Hayden won the Miss World crown in the year 1997 after Faria and Aishwarya Rai.  She later became a stage artist and also featured in a few Bollywood films.

The gorgeous Yukta Mookhey won the Miss World title in 1999 in London. While she joined BJP a few years ago, Yukta Mookhey tried her career in Bollywood and worked in a few South-Indian movies.

In the year 2000, Miss World pageant came back to India. It was a very proud moment when the then Miss World Yukta Mookhey (also, from India) passed on her crown, Priyanka Chopra. One of the best Indian actresses, Priyanka Chopra is now a global icon. She was also one of the World’s 100 Most Powerful Women in 2017, as listed by the Forbes Magazine.

Miss World 2017 Manushi Chhillar won the Miss World title for India in the year 2017.  Now set to try her luck in Bollywood, Manushi Chillar became a semi-finalist in the Top Model, People’s Choice and Multimedia competitions and was the winner of the Head-to-Head Challenge from Group Nine and co-winner of the Beauty with a Purpose competition, during the contest.

(The above story first appeared on LatestLY on Dec 13, 2019 02:00 PM IST. For more news and updates on politics, world, sports, entertainment and lifestyle, log on to our website latestly.com).