In recent times, Punjabi music has captivated everyone’s attention for its unique rhythmic beats and high notes. While the Indian music industry is completely dominated by Bollywood music, Punjabi songs have managed to garner the attention of people across the country. 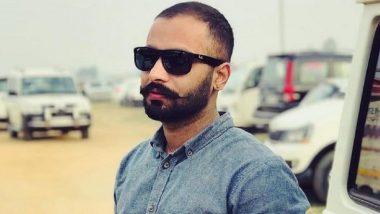 In recent times, Punjabi music has captivated everyone’s attention for its unique rhythmic beats and high notes. While the Indian music industry is completely dominated by Bollywood music, Punjabi songs have managed to garner the attention of people across the country. It would not be wrong to say that Punjabi music is overshadowing Bollywood music with its catchy tunes. The rising demand has opened gates for many artists including singers and music composers. Amidst this highly competitive environment, Amritpal Singh has set his footprints as one of the most sought names in the music industry.

He is the brainchild behind Outlaw Records, a record label that has given many super hit songs to the Punjabi music industry’s noteworthy singers. Amritpal Singh, widely known as Amba Joia is an entrepreneur by profession and a producer by passion. Based in Ludhiana, he began his career as a song producer and is now soaring high in the music scenario. Amba Joia’s primary goal is to promote deserving artists on a pan India level.

For the same, the producer has been working relentlessly by giving new-age artists a platform through his record label. When asked about the reason behind investing majorly in the new talented artists, the producer revealed that today’s artists understand the culture very well and create music as per the trends. “Outlaw Records truly believes in originality and not recreated versions. With the Punjabi culture at its core, we believe in producing music that has a global connect”, said the producer.

Outlaw Records has so far introduced many musical artists like Ekam Sudhar, Veer Sandhu, Vikram Gill and Minda among others. The music label has also had its association with notable names from the industry like Varinder Brar, Navaan Sandhu and Roop Bhullar. The record label has given many chartbusters like ‘Black Life’ by Navaan Sandhu, ‘Thik Thak’ by Minda, ‘Kyu Ni Dekhda’ by Sidhu Moose Wala and ‘Tera Viah’ by Minda among other hit songs.

In the coming time, Amritpal Singh has a lineup of projects including originals, music videos and albums. Besides launching new music artists, many collaborations with well-known singers are in store for the coveted record label. Along with his entrepreneurial pursuits and successful run as a producer, Amba Joia’s humanitarian acts have significantly contributed to the betterment of society as a whole.