Uttarakhand Char Dham Yatra Attracts Devotees in Large Numbers With All COVID-19 Protocols in Place; Here's How to Book and Get ePass; Check Details

The Char Dham Yatra is a pilgrimage to four Hindu shrines of Gangotri, Yamunotri, Kedarnath And Badrinath. All four temple shrines are located in Garhwal Himalayas range of Uttarakhand. The state government of Uttarakhand has strictly implemented the standard operating procedure (SOP) on Char Dham Yatra in the wake of the COVID-19 pandemic. 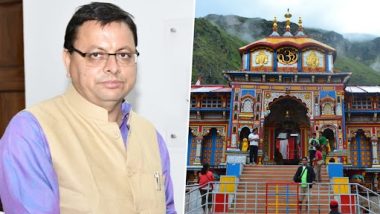 All the necessary provisions have been made for the travellers, and COVID-19  protocols are being strictly followed. In its Standard Operating Procedures (SOPs) for the Chardham Yatra, the Uttarakhand government made it mandatory for pilgrims to possess a COVID-19 negative report. Also, travellers have to note that registration and e-pass will be mandatory for darshan in the four pilgrimages. Check the detailed guidelines here.

If You are planning for the Char Dham Yatra, Here's How You Can Book and Get ePass:

The Char Dham yatra commenced after the Uttarakhand High Court lifted the ban on the yatra on September 16. The court had stated that the yatra would follow COVID-19 protocols on its resumption. The HC had banned the yatra earlier this year citing the COVID-19 threat following which the state government had moved the SC against the order. The High Court, on June 28, stayed the state cabinet’s decision to start the yatra from July 1.

As per reports, more than 38 lakh pilgrims visited the shrines in 2019 while only 4.2 lakh visited in 2020. The yatra provides employment opportunities to more than 10,000 people, thereby forming an economic ecosystem that benefits the shrines as well as the areas around these shrines.

Char Dham is considered as the most sacred religious place to be visited by Hindus, to get rid of their sins and pave the path to ultimate goal of human life - the Moksha, ie redemption from the cycle of birth & death in this world. Every Hindu is expected to perform the Yatra at least once in their lifetime.

(The above story first appeared on LatestLY on Sep 22, 2021 01:50 PM IST. For more news and updates on politics, world, sports, entertainment and lifestyle, log on to our website latestly.com).