A Maths Meme Has Left People Scratching Their Heads, Although The Answer is Quite Easy (Check Viral Tweet) 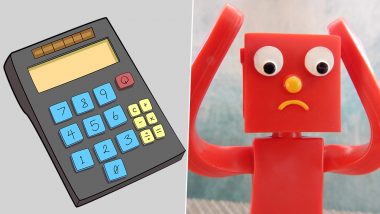 Did you always hate mathematics as a child? Well, we all have been there at some point. The numbers themselves can make people go dizzy, leave alone the equations, the formulae and the complex sums. But once in a while, it is good to tease your brain with some math. A Twitter user did just that when he posted a math sum and asked netizens to solve it, and they are now scratching their heads. The user KJ Cheetham posted a mathematics problem with its answer, which seemingly doesn't add up. The tweet is now going viral with people trying to figure out how the OP came up with the answer. If you too have been thinking how, let us break it down for you. Maths Jokes and Memes That Will Make Every Algebro Laugh Out Loud.

The maths problem reads, "A maths meme that is actually funny rather than stupid: Solve carefully! 230 - 220 x 0.5 = You probably won’t believe it but the answer is 5! Here the catch is the answer is 120, which many users have got right. But in mathematical terms, 120 can be denoted with 5! the '!' sign meaning factorial.

It essentially means 5x4x3x2x1= 120. So the answer (5!) is actually veiled. Although most of them came up with the right answer, they couldn't connect 120 to 5!. More Than Half of Class 8 Students Can’t Solve Basic Mathematics; 27% Can’t Read—Reveals ASER 2018 Report.

A maths meme that is actually funny rather than stupid:

You probably won’t believe it but the answer is 5!#maths

Here's the explanation for the answer:

In mathematics, ! denotes the factorial. So if you write 3! it means 3x2x1 or commonly written as 1x2x3. Had the user given the full stop after completing the equation, many would have got it right. Once he posted the explanation, people were impressed with the trick.

Omg this is so cool.

Well, the factorial (!) is not commonly used in standard academic learning, which is why a lot of people fumbled while figuring out the answer. But the tweet was well-appreciated by math nerds on Twitter. Well, if math gave you nightmares back in school, this sum is clearly not for you.

(The above story first appeared on LatestLY on Jul 16, 2019 12:44 PM IST. For more news and updates on politics, world, sports, entertainment and lifestyle, log on to our website latestly.com).