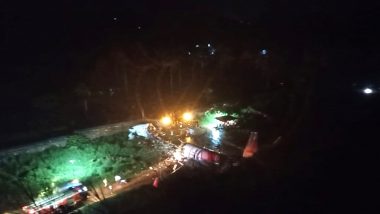 An Air India Express plane with nearly 200 people on board has crashed at Calicut airport in Kerala’s Kozhikode. The aircraft, en route from Dubai, skidded off the runway at the airport upon landing. Rescue operations are underway, with emergency services at the scene. According to media reports, a pilot and two passengers were killed in the incident. More reports on the same are awaited. Meanwhile, people on Twitter began to share their condolences for those dead and praying for the victims of the plane crash. Photos and videos have appeared on social media that show the plane been broken into two pieces. Air India Express Dubai-Kozhikode Plane Crash: Pilot Dead, Aircraft Breaks Into Two Pieces; Here's What We Know So Far.

The mishap of the flight IX-1344 took place at around 7:45 pm, on August 7, 2020. The plane was carrying 191 persons. The tragic incident shook people on social media. Videos and pictures from the scene appear on the internet as search and rescue operations are on. The state is already dealing with the severe monsoon that created floods on the streets and lanes. And the plane crash added to the woes. Twitterati prays for the victims of the plane crash, as various tweets and videos go viral.

Prayers to the passengers, crews and their families. #PlaneCrash #Calicut

Pilot reported to be dead.

Plane has broken into two pieces.

Praying for the Victims!

Very sad to hear this news!! May the pilot REST IN PEACE and i hope the passengers and the crew are safe.🙏#airindia #planecrash pic.twitter.com/e5vh8ICNN5

Pic From the Scene!

.174 passengers of the total 189 passengers on board #airindia flight from dubai that crashlanded in #Calicut are Senior Citizens. 10 children. Plane broke into 2 pieces. 1 pilot has diеd in the mishap. #Kerala #Blackout #2020worstyear#Kozhikode #KozhikodeAirport#planecrash pic.twitter.com/OCEdaMrk70

Prayers Continue for the Victims of the Plane Crash

The Directorate General of Civil Aviation (DGCA) has ordered a detailed inquiry into the incident. More reports on the incident are awaited. People are advised not to panic and only wait for official confirmation. The Air India Express flight, IX-1344 was reportedly a part of the Vande Bharat Mission, launched by the government to bring back Indians stranded in foreign countries because of the pandemic.

(The above story first appeared on LatestLY on Aug 07, 2020 09:59 PM IST. For more news and updates on politics, world, sports, entertainment and lifestyle, log on to our website latestly.com).