In a tragic incident, an Air Inia Express Flight skidded off the runway on Friday in Kozhikode. There were more than 180 passengers at the time of the incident. The flight returned from Dubai. 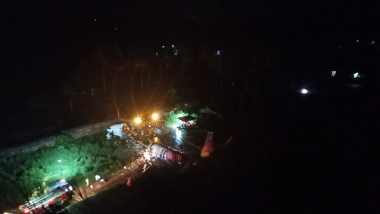 Kozhikode, August 7: In a tragic incident, an Air Inia Express Flight IX-1344 skidded off the runway on Friday at Calicut airport in Kozhikode. There were more than 180 passengers at the time of the incident. The flight returned from Dubai. Three people, including  a pilot reportedly lost their lives in the incident. Number of passengers also sustained injuries. The plane reported broke into two pieces.

Rescue operations are currently underway. Fire tenders and ambulances have rushed to the spot. The injured passengers were shifted to hospitals. According to reports, the flight crashed after overshooting the runway.  The Directorate General of Civil Aviation (DGCA) ordered a detailed inquiry into the matter. Air India Plane Skids During Landing at Kozhikode Airport.

Till now, there are no reports on the number of people injured in the crash.  More details are still awaited. The incident took place amid heavy rainfall. Earlier in the day, heavy rainfall triggered landslide in Kerala killing at least 15 people.

(The above story first appeared on LatestLY on Aug 07, 2020 08:56 PM IST. For more news and updates on politics, world, sports, entertainment and lifestyle, log on to our website latestly.com).