A man in Ambala, Haryana who reportedly returned from Bangkok created chaos outside his house after authorities visited to put quarantined posters. But he refused to obey the decision and tore the posters, repeatedly, seeing the opportunity. Meanwhile, he becomes the butt of all jokes on social media, courtesy, fake news! 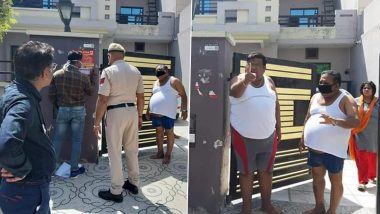 Two Men Lie to Their Wives and Go to Bangkok (Photo Credits: Twitter)

The novel coronavirus is what people are only talking at the moment. The deadly virus has spread a widespread fear and panic globally. Many countries, including India, is currently under lockdown. With no cure immediately available, staying indoor, maintaining social distance and stay hygienic are the only ways to prevent yourself from catching COVID-19. Amid the ongoing panic comes a tweet that is going viral on social media. A man in Ambala, Haryana who reportedly returned from Bangkok created chaos outside his house after authorities visited to put quarantined posters. But he refused to obey the decision and tore the posters, repeatedly, seeing the opportunity. Meanwhile, he becomes the butt of all jokes on social media, courtesy, fake news! Good Samaritans Are Helping Senior Citizens, Support Staff, Needy & Strays During Coronavirus Lockdown In India.

India is under lockdown until April 14, 2020. As the whole nation is maintaining the same, all transportation facilities have been stopped, including domestic and international flights. Those who returned from visiting abroad are asked to stay in isolation for at least 14 days. Quarantine posters are put outside their houses to create awareness in the identified areas.

The same was followed at this man's house. After the airport report came out, the cops visited their home to paste the poster of ‘Home Under Quarantine.’ But he tore it, seeing the opportunity. The health department team and police officials were notified, who immediately visited him to make him understand about the rising concerns related to COVID-19 and why quarantining was necessary. Amarujala reported that the unidentified man refused to co-operate and tore the quarantine posters, again. He repeated the same when officials visited the third time and went on abusing them. A complaint was registered against the man's behaviour, and the investigation is underway.

As the news reached on social media, a Twitter user claimed that the man in question lied to his wife that he is going to Bangalore for business but visited Bangkok. Soon, he became the butt of all jokes.

They went to Bangkok and told their wives that they are going to Bangalore for business...

when airport report came to police they pasted a poster on their house wall ..🤣🤣🤣🤣🤣

Another Twitter User Claiming He Lied to His Wife!

#carona last thing you expect after a jolly trip to bangkok & you lied to your wife that U went to bangalore !!!! 😜😜😜 https://t.co/DYiueHlEjr

#Bangkok was seen running as one of the top trending hashtags at the microblogging platform with people ROFLing over the event. It should be noted here that there is no report of the man lying his wife to visit Bangkok. Although he returned from Thailand this month, his irresponsibility and lack of co-operation with the health officials during the time of pandemic is being questioned.

(The above story first appeared on LatestLY on Mar 30, 2020 06:13 PM IST. For more news and updates on politics, world, sports, entertainment and lifestyle, log on to our website latestly.com).