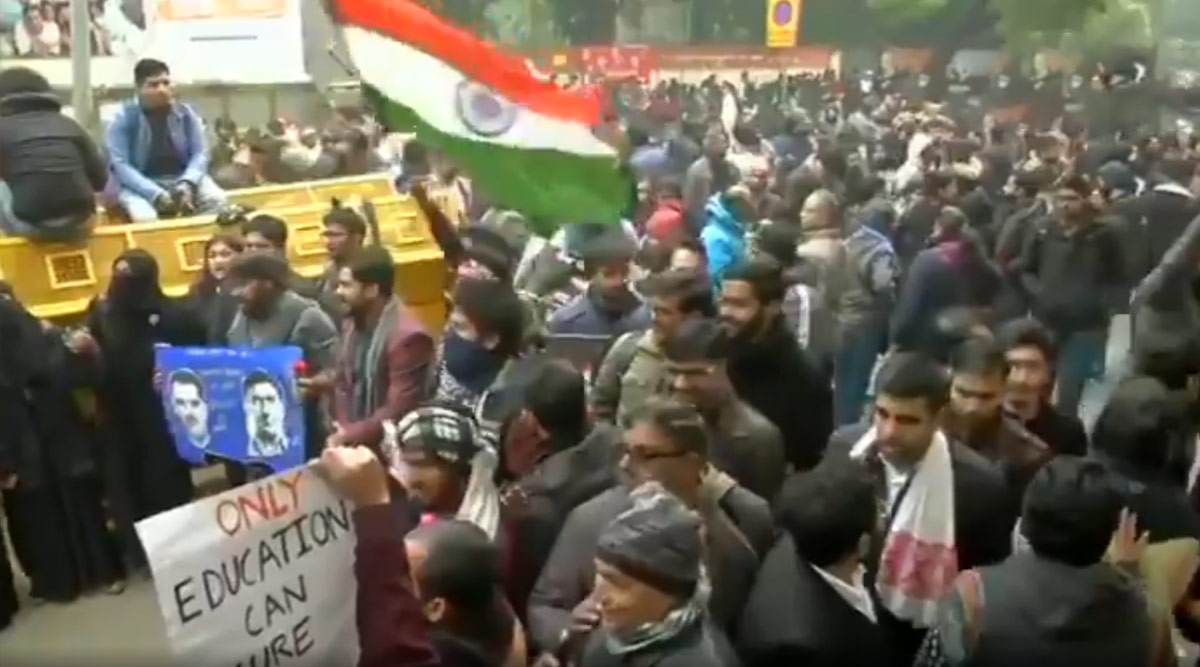 New Delhi, December 19: Amid ongoing protests against Citizenship Amendment Act (CAA), agitators on Thursday sang “Saare jahaan se achha, Hindustan humara” at Jantar Mantar in New Delhi. Along with the national flag the protesters were also holding posters of freedom fighters Ram Prasad Bismil and Ashfaqullah Khan. Both the freedom fighters attained martyrdom on this day in 1927. The video of the protesters singing the patriotic song was shared by news agency ANI. Internet in Assam Must be Restored by 5 PM Today, Orders Gauhati HC as Services Remain Suspended Due to Anti-CAA Protests.

In the morning on Thursday, the Delhi Rail Metro Corporation (DMRC) shut down 18 stations in the national capital. Later in the evening, these stations were opened for commuters. Section 144 was also imposed in various parts of Delhi. Delhi Police PRO, MS Randhawa while addressing media said that police are closely monitoring social media. He also asked people that if they receive any rumour they should share it with the police. Anti-Citizenship Amendment Act Protests Live News Updates.

The controversial Citizenship Amendment Bill, 2019 was passed by Parliament last week. After the passage of the bill, widespread protests rocked the country, especially in Assam. Protests intensified after Delhi police’s action against protesting students of Jamia Millia Islamia University. The act is considered by various critiques as discriminatory against a particular section of the society as it provides citizenship only to Hindu, Sikh, Parsi, Christian, Buddhist and Jain refugees. Notably, Muslims were not included in the list.