In the latest, people have found similarities between Anushka and Natasa, Hardik Pandya's wife, who also recently gave birth to a baby. Turns out, both of the ladies have posted pics in the same dress while they were pregnant. 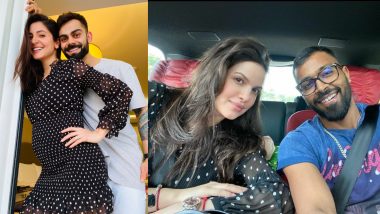 Anushka Sharma is expecting her first baby. And the pregnant with 10,000 things to say about it, including well-wishes, jokes, memes, and very weird observations. In the latest, people have found similarities between Anushka and Natasa, Hardik Pandya's wife, who also recently gave birth to a baby. Turns out, both of the ladies have posted pics in the same dress while they were pregnant. The black dress with white polka dots has been credited as the magical baby maker dress. Inke fans ka sense of humour bohut achcha hai, aapko dheere dheere pata chalega. Anushka Sharma And Virat Kohli Expecting First Child: Alia Bhatt, Varun Dhawan, Taapsee Pannu And Others Congratulate The Power Couple.

BTW, the dress is from an LA-based clothing label called. The dress costs Rs 45,000. Well, that is a lot to pay for that dress. Certainly, the dress is going to get more popular over the next few days. Natasa Stankovic Shares A Photo Of Her Baby Boy With Hardik Pandya and We Are Already Gushing Over The Maa-Beta (View Post).

Check Out The Observation From A Fan Here:

Drop a comment below when you see it. pic.twitter.com/SHZjE9tycv

Here Is Another Joke About The Same Dress

Wonderful to see the entire country come together to show our heartful gratitude and support for the healthcare staff. Amazing initiative for all of us Indians to be a part of. Together we stand united 🤝 , stronger 💪 and even more determined to fight these difficult times. Jai Hind.

And then, we were three! Arriving Jan 2021 ❤️🙏 pic.twitter.com/iWANZ4cPdD

Last time, we spoke so much about a dress, it was when we were arguing on the internet about its colour. Remember the dress, which some saw as blue and black while some saw it as white and golden?

On the work front, Anushka was last seen on screen in the film, Zero. She seems to have taken a sabbatical from acting. But she produced the web-series, Paatal Lok, that was loved by the majority. She also produced the fantasy film, Bulbbul, which is an underrated one.

(The above story first appeared on LatestLY on Aug 27, 2020 04:36 PM IST. For more news and updates on politics, world, sports, entertainment and lifestyle, log on to our website latestly.com).