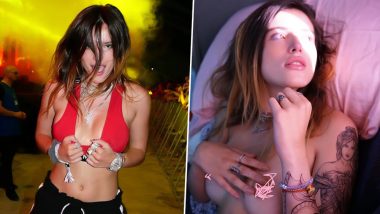 In the pictures, she can be seen soaking up the sun on a bed looking super sexy. She is not wearing any makeup, looking boldly at the lenses while cupping her breasts. These posts were shared with long poetic captions that are a must-read.

Take a look at her pictures:

If you don’t know it learn it Learn it Love it Strive with it Forget it Learn it again And again until u know it And the moment u know it Stop because you’ll never know it fully Once you think you have learned everything u have started back at square one And now you have learned nothing. There is no roof There is not celling The box doesn’t have a top The box is lid less Now learn it again. #thelifeofawannabemogul

What is wrong with me? Why do I always need Validation from everyone but mostly men... Everyone keeps telling me to be single, be alone, and make your self happy. But All those things sound so fucking scary to me. all I want is him. I want him to hold me, I want him to love me, I want him to tell me it's ok, I want him to look me in the eyes and let me know I'm accepted. Why? Because I can't accept myself. For some reason in my head I'm just not fucking good enough. Not good enough for him or Her or anyone else. And if it's not him I just look for the "next" him, or her Why can't I just look for the next me? Find me and accept me. Was it because I was molested my whole life. Exposed to sex at such a young age it's all I know how to offer to the world...or is it because I was raised to think I wasn't good enough. Not good enough for her or anything else. But it doesn't matter what happened to me.. What matters is whats happening to me right now. I can't blame my childhood, in fact I can't blame anyone for anything. All I can do is blame me. I blame me for not loving myself. I blame me for not thinking I'm attractive, I blame me for putting this on everyone around me. Expecting people to love me enough for me to love myself. But at the end of the day that will never happen. Because the only way to get to your end goal is to work through it. Not around or above or try and find a cheat code so you don't have to hurt as much. You have to hurt in this world. Hurting, loving, and accepting. That's what our emotional world lays on. Right now I only have one of those things. Can you guess what it is? Hurting. Right now I only hurt...but I'm not hurting for other people no I'm only hurting myself. By not loving me and by not accepting me. Usually these free handed writing bits..they have an end, but I don't have an end. I'm still figuring it out as always. So is that ok? Is it ok to know what your end goal Is but absolutely no way or idea how to achieve it. It's probably not but I can only start by accepting it. This poem is about mommy and daddy and me and you ❤️ #thelifeofawannabemogul

(The above story first appeared on LatestLY on Aug 21, 2019 06:28 PM IST. For more news and updates on politics, world, sports, entertainment and lifestyle, log on to our website latestly.com).