Bernie Sanders' Mittens in the Viral US Inauguration Day Pic Are ACTUALLY Made by a Humble Vermont School Teacher, Jen Ellis Who Now Has All Her Creations Sold Out!

You will be surprised to know that the woman behind the popular mittens sported by Bernie Sanders in the viral US Inauguration day pic is actually a humble and crafty school teacher from Vermont! 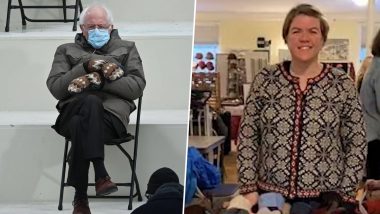 Bernie Sanders in Mittens & Vermont schoolteacher who made them (Photo Credits: Twitter)

You will be surprised to know that the woman behind the popular mittens sported by Bernie Sanders in the viral US Inauguration day pic is actually made by a humble and crafty school teacher from Vermont! Bernie Sanders’ inauguration attire and pose became a viral meme on social media with people placing him legit everywhere, right from WWE rings to the kitchen. However, it is Sanders' mitten or "smittens", as its maker names it, have people's hearts. Contradicting to attendees' formal winter style, Sanders went for a rather casual look BUT it was the fleece-lined mittens he was seen in, that took over social media. It had many people searching for it online.

Those mittens are a creation of Jen Ellis who is a second-grade elementary school teacher.  Moreover, the mittens are more than what just meets the eyes. These cosy winter wear is made from recycled sweaters and are environmentally-friendly.  They are also lined with fleece made from plastic bottles which makes the creation even more interesting. Ellis gave Sanders these mittens during his campaign trail in 2016, but did not expect him to start wearing them at high-profile events and DEFINITELY did not expect it to go viral the way it did.

You remember how big of a buzz, the very casual presence of Vermont Senator Bernie Sanders at US Inauguration made! People began to place him in every possible place creating funny memes. Even a fun meme generator was created for his picture that was about to crash. US Inauguration Day Memes Take Over Twitter: From Bernie Sanders' Casual Look to Virtual Despacito Performance, Netizens Make Jokes on Unusual Sights on The Big Day.

Bernie Sanders' Mittens in the Viral US Inauguration Day Pic Is ACTUALLY Made by a Humble Vermont School Teacher, Jen Ellis

Senator Bernie Sanders' inauguration day mittens have become an internet sensation. Meet the Vermont schoolteacher who made them pic.twitter.com/mLJltfucMw

Jen Ellis who teaches the second grade took to Twitter to announce: "Thanks for all the interest in Bernie's mittens! It truly has been an amazing and historic day! I'm so flattered that Bernie wore them to the inauguration. Sadly, I have no more mittens for sale." The humble teacher shared references to other crafters and said: "There are a lot of great crafters on ETSY who make them."

(The above story first appeared on LatestLY on Jan 24, 2021 03:14 PM IST. For more news and updates on politics, world, sports, entertainment and lifestyle, log on to our website latestly.com).