Bhagat Singh remains a heroic figure for the youth, and continues to be, considering his sacrifice at a very young age of 23. It will be Bhagat Singh’s 113th birth anniversary this year, on September 28, i.e. Monday. As the nation observes the birth anniversary of the notable revolutionary, we bring you some of the interesting facts and fascinating trivia about him. 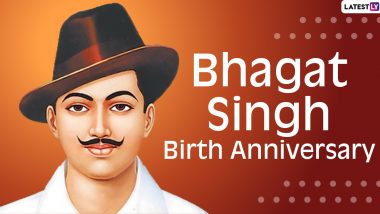 Bhagat Singh Trivia and Facts: Bhagat Singh is one of the poster boys of India’s fight for independence. He was one of the bravest and the youngest Indian freedom fighter who laid down his life for the independence of the country. Bhagat Singh remains a heroic figure for the youth, and continues to be, considering his sacrifice at a very young age of 23. It will be Bhagat Singh’s 113th birth anniversary this year, on September 28, i.e. Monday. As the nation observes the birth anniversary of the notable revolutionary, we at LatestLY bring you some of the interesting facts and fascinating trivia about Bhagat Singh. Delhi Assembly Celebrates Birth Anniversaries of Vithalbhai Patel, Bhagat Singh.

1. Born on September 28, in 1907, the date of Bhagat Singh’s birth coincides with the date of his father’s and his uncles’ release from the prison.

2. It is a little-known fact that Bhagat Singh’s family was active in politics. They followed Swami Dayananda Saraswati’s Hindu reformist movement – Arya Samaj – significantly, something which greatly influenced Bhagat Singh in his lifetime.

3. Bhagat Singh was only 12 years old when he witnessed the incident of Jallianwala Bagh massacre in 1919. The loss of lives and the brutality of the British government left a lasting impact on him. What Cases Were Filed Again The Freedom Fighter And Which Indian Testified Against Him?

4. After Mahatma Gandhi called off the non-cooperation movement in 1920, Bhagat Singh felt disillusioned with the former’s idea of non-violence. It was then Bhagat Singh decided to overthrow the British govt by violent means.

5. Bhagat Singh got inclined to politics at a young age. Being inspired by a Young Italy movement in the early 1920s, he joined Hindustan Republic Association, which was a group of prominent leaders like Chandrashekhar Azad, Ram Prasad Bismil and Shahid Ashfaqallah Khan.

6. It is a little-known fact that Bhagat Singh ran away from his home to Cawnpore (now Kanpur) to avoid an arranged marriage. The line of a letter written by a young freedom fighter ‘Meri Dulhan toh Ab Azaadi Hai’.

7. Bhagat Singh was a prolific writer and wrote for many newspapers, journals, and publications like Kirti, and Veer Arjun. He used the pen names of Balwant, Ranjit, and Vidrohi.

8. In the late 1920s, Bhagat Singh visited villages carrying a lantern and using the power of plays and dramas, that aimed at encouraging people to overthrow the British government.

9. Not many people know who was the idol of Bhagat Singh. While some say it was Chandrashekhar Azad, others say it was Lala Lajpat Rai. Well, Bhagat Singh’s idol was Kartar Singh Sarabha, who was the founding member of the Ghadar Party.

11. Bhagat Singh was an atheist. He initially believed in the Almighty. However, after he witnessed Hindu-Muslims rioting over their religions, he decided to become an atheist.

12. Not many people know that Bhagat Singh’s friend ‘Prannath Mehta’ had prepared a rough draft pleading Bhagat Singh’s clemency. However, Singh refused to sing his own mercy plea.

13. Another fact that you may find interesting is that Bhagat Singh was a master of disguise. He avoided several policemen who were vying go after his head.

14. The Director of IMF, i.e. Sir Horae Williamson, once opined that ‘Bhagat Singh’s photograph was there with every kid and youth students in the state of Punjab.

There’s a lot one can learn from Bhagat Singh. At the time when we are all thinking about work, jobs, etc. on our mind, Bhagat Singh sacrificed his life at the young age of 23. He was hanged till death, for his involvement in a murder of British official. His oratory skills, articulation, bravery, and sharp mind are what gain him popularity and soon!

(The above story first appeared on LatestLY on Sep 28, 2020 08:30 AM IST. For more news and updates on politics, world, sports, entertainment and lifestyle, log on to our website latestly.com).