A Mumbai supporter who was cheering on for Rohit Sharma’s team till Dhoni took the field. As soon as CSK skipper made an entrance, the guy from the viral video donned the Chennai Super Kings’ yellow jersey and began shouting ‘Dhoni, Dhoni’! 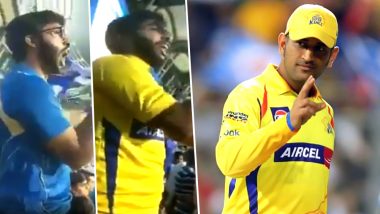 Indian Premier League 2018 marked the return of Chennai Super Kings after a hiatus of two years, and it also meant Mahendra Singh Dhoni was back as ‘Thala’! After ‘God of Cricket’ Sachin Tendulkar, if there is any cricketer who enjoys unanimous support playing in any part of the country, it has been MS Dhoni. And the biggest example of it was witnessed during IPL 2018 opening match between Mumbai Indians and Chennai Super Kings on April 8. A Mumbai supporter who was cheering on for Rohit Sharma’s team till Dhoni took the field. As soon as CSK skipper made an entrance, the guy from the viral video donned the Chennai Super Kings’ yellow jersey and began shouting ‘Dhoni, Dhoni’! Yes, he switched loyalties but earned the tag of ‘biggest MS Dhoni fan’ for sure.

It is not uncommon for other teams to switch loyalties when MS Dhoni is a part of the opponent side. We have seen 'Chacha Chicago', the Karachi-born Mohammad Bashir who happened to the die-hard Pakistan cricket fan but began supporting India openly during ICC Champions Trophy 2017 because of his love for Mahendra Singh Dhoni. Now that you know Dhoni has such an effect on his fans let us get back to this guy who became the ‘star’ of the social media after Mumbai Indians-Chennai Super Kings clash at the start of the month.

The video has gone absolutely crazy viral showed a youngster in Mumbai jersey and extensively supporting the home team at the Wankhede Stadium. He is heard shouting ‘Come on Mumbai…Mumbai, Mumbai’ amidst the sea of blue Mumbai Indians fans hoisting the team flags. It looks like a routine video captured to show the love and passion fans have for their favourite IPL teams, but it contained a twist and trust us it is worth your wait.

Not Sure About 'Perfect' But He is Definitely Dhoni's Biggest Fan!

In between all commotion and shouts for Mumbai Indians, there is a change in atmosphere. MS Dhoni stepped in to bat next, though we cannot see in the viral footage but can make out from the changing emotions exhibited by the guy and people surrounding him. But what followed was absolutely hilarious and sweet. He erupted in joy and began jumping up and down, all while shouting ‘woohoo, Dhoni’! Not just the excitement in words but he actually went on to wear the Chennai Super Kings jersey to extend his support to one and only Dhoni.

The twist did not really end at that point as the guy changed back to his original Mumbai Indians jersey as soon as Dhoni departed! Yes, he did exactly that and also shook hands with fellow Mumbai Indians jersey. But before you begin name-calling on flipping sides, try and understand that he seems to be an ardent MS Dhoni fan who supported him throughout his innings and a Mumbai Indian fan who wished to see his side win the match. Simple. This match though ended with Chennai thumping Mumbai riding on Dwayne Bravo’s firecracker innings. By supporting both MS Dhoni and Mumbai Indians, the boy definitely had a win-win situation, and we love it.

(The above story first appeared on LatestLY on Apr 24, 2018 06:07 PM IST. For more news and updates on politics, world, sports, entertainment and lifestyle, log on to our website latestly.com).