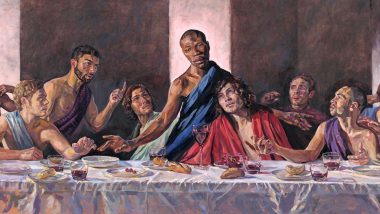 One of Britain’s oldest churches St Albans Cathedral will replace the painting of The Last Supper by featuring black Jesus. The Dean of the church has agreed to install the nine feet of artwork on the altar after it felt it would not be otherwise fit to preach about racial justice. The painting by artist Lorna May Wadsworth will be a part of a prayer installation in the North Transept from July 4. The developments come after the Black Lives Matter movement which initiated by the death of a black man George Floyd at the hands of a white police officer. It erupted protests with people supporting the black community and demanding equal rights. Little White Kids Doing Black Lives Matter Protest by Carrying Their Black Friends in a Toy Cart is The Cutest BLM Demonstration (Watch Viral Video)

The painting A Last Supper by 15th-century artist Da Vinci will be reworked by casting a Jamaican-born model as Christ. The announcement came a week after the Archbishop of Canterbury urged the Church of England to reconsider the depicting of white Christ. Justin Welby said also Christians should also accommodate global depictions of Jesus which show him as black, Chinese and Middle Eastern. Black Lives Matter: From Newlywed Couple Joining Philadelphia Protests to Houston Police Comforting Little Girl, These Heartwarming Instances Will Make You Smile (Watch Videos)

We’re grateful to @Lorna_May_ for her painting of A Last Supper, which’ll be displayed from Saturday 4 July. In the painting Jesus is a black man, so calls us to ‘look with fresh eyes at something you think you know’. #BlackLivesMatter

Justin Welby, after Archbishop of Canterbury, said that Christians should accommodate depictions of Jesus across the world to show him as black, Chinese and Middle Eastern. Following which, St Albans Cathedral in Hertfordshire made the decision. They are covering up their existing altarpiece painting with a high-resolution print.

Jesus was Middle Eastern, not white. It's important we remember this.

But the God we worship in Christ is universal, and the hope he offers is good news for us all. Here are some of my favourites images of Christ from around the world.

He had said, "You go into their churches and you don’t see a White Jesus — you see a Black Jesus, or Chinese Jesus, or a Middle Eastern Jesus — which is of course the most accurate. You see a Fijian Jesus — you see Jesus portrayed in as many ways as there are cultures, languages and understandings."

It will cover up three-part painting of a scene from the Nativity that shows the Virgin Mary and Child surrounded by shepherds and kings. The altarpiece at the 11th-century abbey will be replaced with a high-resolution nine-feet print of Wadsworth’s painting, who based Jesus’s features on those of Tafari Hinds, a Jamaican model. The painting will be displayed till the end of October and members can pray or light a candle in support of the Black Lives Matter movement.

The church in a statement on their website wrote, "At St Albans Cathedral we stand with the Black Lives Matter movement to be allies for change – building a strong, just and fair community where the dignity of every human being is honoured and celebrated; where black voices are heard, and where black lives matter. In the painting Jesus is a black man, and so calls us to ‘look with fresh eyes at something you think you know’."

Talking about the painting, Wadsworth said, "Painting the Last Supper altarpiece made me really think about how we are accustomed to seeing Jesus portrayed. Experts agree he would most likely have had Middle Eastern features, yet for centuries European artists have traditionally painted Christ in their own image."

(The above story first appeared on LatestLY on Jul 02, 2020 03:51 PM IST. For more news and updates on politics, world, sports, entertainment and lifestyle, log on to our website latestly.com).