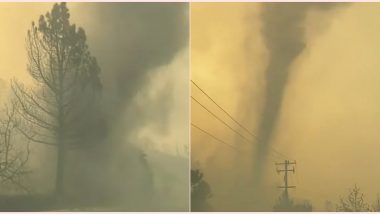 The California fire in the United States of America is unfortunately growing, and spanning across the areas. The firefighters continue to battle with the ever-growing fires, evacuations are ongoing and meanwhile, many videos and pictures surfacing across the internet show the intensity of the wildfire. According to media reports, the Bobcat fire in the mountains of the northeast Los Angeles is still burning, and it has been nearly two weeks now. A massive ‘smokenado’ was captured on camera twisting into the sky near Big Pines as the nearly 100,000 care Bobcat fire continue to rage. The incredible video was caught near Big Pine Highway and Largo Vista. So, what is smokenado? What causes a smoke tornado? In this article, we bring you the reason as to why and how a fire spawns smokenado.

The Bobcat Fire burning in Los Angeles County has scorched more than 100,000 acres, making it one of the largest fires in the country’s history. It is one of at least 27 wildfires currently burning in the state. Thousands of firefighters are battling the blazes. About 15 percent of the Bobcat Fire, so far has been contained. The cause of the Bobcat Fire, which reportedly started on September 6 is still not known, but many videos and pictures appeared on social media, showing the devastating situation. Among them, was the clip capturing a smokenado, twisting into the sky. California Wildfires: August Complex Fire Is Now Largest in the State’s History, Know Details of Six Raging Wildfires That Burned in 2020.

Dramatic video shows a large 'smokenado' formed from the raging Bobcat Fire in Southern California. The wildfire has torched about 100,000 acres since igniting two weeks ago. https://t.co/uvHwFuUWGZ pic.twitter.com/1KIDmC6rx6

Smoke Tornado: What Causes a Smokenado?

Somenadoes are not tornadoes in real sense. They occur when a gust of extremely hot air blows from the fire, producing a spinning momentum that then sucks up the embers and debris. A smokenado happens when warm some from a wildfire combines with cooler temperatures and create a dust devil. They are a strong, well-formed and relatively short-lived whirlwind, ranging from small to large. Well-developed dust devils are occasionally strong enough to cause minor damage.

Strong, erratic winds have been a major factor in spreading the blaze. Recently, a video of wildfires resulting in firenado or fire tornado in California also went viral on social media. A fire tornado is a result of dry air in the region of wildfires. The US state has been experiencing one of the most devastating wildfires, and firefighters noted that full containment in several areas could only be expected until October 30, 2020.

(The above story first appeared on LatestLY on Sep 21, 2020 02:25 PM IST. For more news and updates on politics, world, sports, entertainment and lifestyle, log on to our website latestly.com).