BTS announced its second English-Language single—‘Butter,’ which is melting ARMYs collective hearts already! Since we need to wait until May when BTS will finally release the highly-anticipated music video, there are few things about the song, fans could be interested to know. 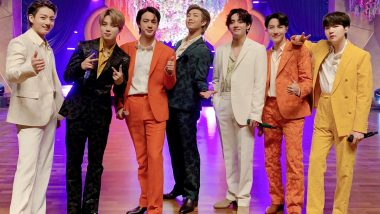 If Dynamite made you drool, wait for ‘Butter.’ The Bangtan Boys, aka BTS, always manages to make the headlines—either with their change in looks, brand engagements, adorable messages for the fandom, ARMY, or the ear-worm songs. Now, the K-Pop boy band announced its second English-Language single—‘Butter,’ which is melting ARMYs collective hearts already! BigHit Music announced the same on Twitter, and fans can’t still keep their calm. But is that all? Since we need to wait until May when BTS will finally release the highly-anticipated music video, there are few things about the song, fans could be interested to know.

A short clip was posted by BigHit Music on social media which featured a heart-shaped block of butter with the background of the entire video dipped in bright yellow, with sounds of a busy kitchen in the back. The clip earned more than six million views on Twitter, and the count is only increasing. The single is the second English song following ‘Dynamite,’ released in August 2020. As soon, as it was announced, fans’ expected reactions took over the internet while they eagerly wait for the song’s release.

The announcement of their upcoming song was made after the K-Pop boys became Louis Vuitton’s brand ambassadors. About the upcoming song, ‘Butter,’ reports note that it will be a “dance pop track brimming with the smooth yet charismatic charm of BTS.” The song will be released on May 21, 2021. The K-Pop boys in last month’s USA Today report expressed their ultimate desire to perform in front of the ARMY, again, once the ongoing pandemic is over.

RM, Jin, Suga, J-Hope, Jimin, V, and Jungkook—BTS have never shied away from making records. The band’s history is proof! While fans keep their expectation high, it won’t be any surprise to see if ‘Butter’ ends up, setting some mind-blowing records, after its release!

(The above story first appeared on LatestLY on Apr 28, 2021 05:36 PM IST. For more news and updates on politics, world, sports, entertainment and lifestyle, log on to our website latestly.com).