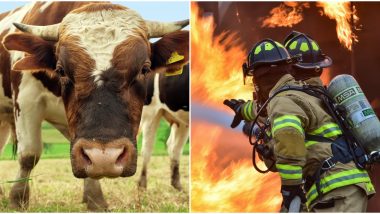 Fire commander Chris Loeschenkohl told The Metro that it was a unique challenge. He further said, "The liquid inside the cylinders was rapidly expanding and essentially the lids of the cryogenic cylinders were just popping off the top and projectiles were being thrown from the building."

He added, "So firefighters went into a defensive mode initially to protect themselves, because there were also LPG cylinders at the neighbouring property, and they did a magnificent job. I've never had anything to do with the artificial insemination [AI] side of things before. There was a couple of other flammable liquid cylinders stored within the building which did cause projectiles to exit the building." Firefighters were in a tricky (or sticky) situation as the substance kept splattering out of the cylinders and came their way. Firefighters spent two hours bringing the fire under control.

Watch the Video of Fire Investigators Inspecting the Scene:

Fire investigators on scene following a blaze that completely destroyed the Yarram Herd Services building last night. Cause of the fire is still being investigated. More on @WINNews_Gip #gippsnews pic.twitter.com/Kyx1X2phV6

Vice-chairman Aaron Thomas told ABC, "A lot of farmers would have semen stock in the building, in those tanks, preparing for artificial insemination (AI), so we' got that plus all of our herd testing equipment that was in there as well. So this is significant damage and it is going to have a flow-on effect on Yarram, especially after the drought that Yarram district has experienced over the last 12 months, it's going to be a real blow for sure."

(The above story first appeared on LatestLY on Sep 17, 2019 06:08 PM IST. For more news and updates on politics, world, sports, entertainment and lifestyle, log on to our website latestly.com).