Coronavirus Outbreak: Patients at Wuhan Hospital in China Given Turtle Meat in Meals to 'Improve Nutrition' 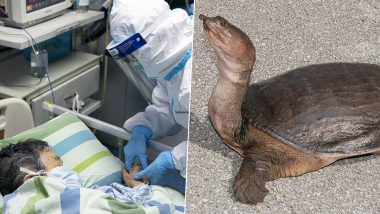 The deaths due to the coronavirus are a major concern world over. While treatment to the patients continues to be administered a shocking thing has to come to fore about patients being fed turtle meat. The novel coronavirus which experts believe has spread because of eating animals like snakes, rats, bats, has claimed over 700 lives in China alone. With the number of infected rising every day, the animal markets in the country have been shut down. But a video was shared by local Chinese media which showed quarantined patients in Wuhan hospital been given turtle meat with rice for their meals. Feeding meat to these patients could potentially risk their lives, but according to traditional Chinese medicine, the meat of softshell turtles is considered nutritious due to the protein in it. The deadly disease has seen the highest one-day fatalities and total cases going up to 28,000 people!

According to the reports in The Sun, a video was released online by Chinese media which showed the infected patients quarantined and served dinner. One person was heard explaining, "Today's meal includes softshell turtle meat." While experts are stating the epidemic broke out from a food market in Wuhan which regularly serves snakes, rats, beavers, koalas for meat, the infected patients were given a lump of animal meat again during treatment at a hospital. The meat was served with rice and some vegetables.

Chinese Medicine believes that softshell turtles which are native to the country are rich in protein and help in quick recovery of the sick. The meat is called ''jia yu' in Mandarin and is considered very nutritious. The turtles are killed from wild or breeding farms and simmered in water, to make a broth from the meat. This reminds us of the video of a woman that went viral a few days ago for eating bat soup in the middle of coronavirus scare. Bats too have been considered effective in traditional Chinese medicine to treat illnesses like cough and malaria. Although the deadly disease has been linked by experts to have spread from the animal market, it is not known if using more meat into the meals would be as effective.

(The above story first appeared on LatestLY on Feb 08, 2020 01:47 PM IST. For more news and updates on politics, world, sports, entertainment and lifestyle, log on to our website latestly.com).