As annoying as it can be sometimes for every parent, a father in China came up with an idea to ensure that his child knows he's not sleeping. 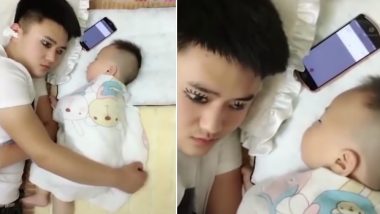 It is one difficult task for every parent to make their child sleep. Toddlers take time to adjust to the sleep routine, thus waking up their parents in the middle of the night. Many a time, children also wake up their parents if they realise they have fallen asleep. As annoying as it can be sometimes for every parent, a father in China came up with an idea to ensure that his child knows he's not sleeping. The father tricked his baby by painting his eyelids exactly to resemble eyes. A quirky idea which we have seen mostly in cartoons was adopted in real by this father. The internet is in love with this dad. Baby Lip Syncing to 'Girls Like You' With Dad is Too Cute to Handle, Watch Adorable Video.

A video of the same was shared on social media and people are loving his creativity. It shows the father sleeping next to the baby and singing a lullaby. It indeed looks like his eyes are open. But actually, the father has painted eyelids on himself. You will realise when the camera goes close to his face. Meanwhile, the baby is peacefully sleeping. The clip is a part of a compilation on a video of dad duties. These Videos of Babies Not Recognising Their Dads After Shaving Beard are Adorably Cute.

It is indeed funny, right? But we are not sure if the trick worked for the father. Meanwhile, the video has been shared widely and garnered close to 5 million views. So innovative! People who have watched this video are inspired and some of them commented that would love to try this idea with their kid. Yes, fathers can be really creative when it comes to doing dad duties.

(The above story first appeared on LatestLY on Mar 01, 2019 04:54 PM IST. For more news and updates on politics, world, sports, entertainment and lifestyle, log on to our website latestly.com).