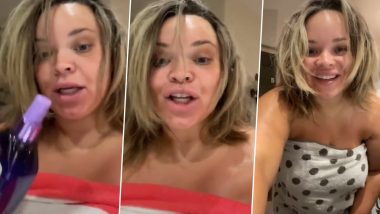 Trisha captions the new TikTok video with: "David Dobrik pushing me to have a thr33some with my 44yo bf (at the time) and an actual 19-year-old." They also called out David even further by explaining: "then I got dumped. I tried to unalive myself. David Dobrik blocked me after 1 1/2. I went to a mental hospital and not even a text if I was ok". Noticing the post going viral on TikTok, Tana commented: "tag yourself i'm the 19 year old who's now in therapy and tryna stay out of drama".

The OnlyFans, Trisha Paytas star often appears on the headlines, for various controversies. Her love affair with Hacmon was nothing less of any drama. According to reports, Trisha, who is a frequent guest on Klein’s podcast, initially met Hacmon after H3H3 paired them together as part of a dating show on the channel. However, both Klein and his wife Hilla, sister of Hacmon, have expressed confusion over the relationship in the past.

(The above story first appeared on LatestLY on May 07, 2021 02:32 PM IST. For more news and updates on politics, world, sports, entertainment and lifestyle, log on to our website latestly.com).