Dia Mirza captivated hearts with performance in Rehnaa Hai Terre Dil Mein and over the years she has managed to make a name for himself. While Bollywood has been her primary love, the actress is equally involved in social causes. 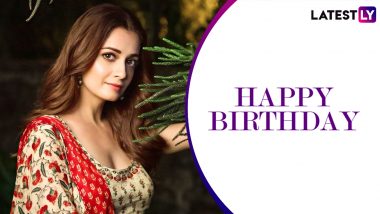 Dia Mirza captivated hearts with performance in Rehnaa Hai Terre Dil Mein and over the years she has managed to make a name for himself. While Bollywood has been her primary love, the actress is equally involved in social causes. She has actively raised voice for environmental issues and been a part of various programs. And for her works related to environmental conservation, she was named UN Environment Goodwill Ambassador in 2017. From social change, conservation and environment, Dia Mirza has been the face of many environmental campaigns across India. Born on December 9, 1981, as Dia Mirza turns 37, we have listed down some of the social causes she has supported. Dia Mirza Promotes ‘Exceed Cares’ Initiative for Underprivileged Kids, Says ‘It Is Nice to Do Work That You Love’.

She has also been involved in works related to the conservation of wildlife. Talking about social activism in between acting, she said, "I have never viewed my participation in social work as a by-product of being a film personality. If I weren’t in films, I would have still done all of this. What does happen is that when you are in films, there is a certain amount of interest that you generate, and it does have a positive influence on a larger section of society. In that sense it is a blessing.  Dia Mirza Slams BCCI for Not Shifting Venue of India vs Bangladesh 1st T20I Despite Delhi’s Deteriorating Air Quality.

Dia Mirza began as a marketing executive for a multimedia firm thereafter which she started taking modelling assignments for commercials. She then focused on her glamorous career and reached several milestones. She won Women's Achievement Award and The Sixth Geospa Asiaspa India Awards for Eco Crusader. The former Miss Asia Pacific has also worked with Andhra Pradesh for several social causes including female foeticide and HIV awareness and is an active member of the Cancer Patients Aid Association. She has also adopted two leopard cubs at the zoological park in Lucknow. She has won several awards including the Green Globe Honour for Extraordinary Work by a Public Figure, IIFA Green Award for Contribution Towards a Greener Environment and the Eco Crusader of the Year award by The Sixth Geospa Asiaspa India Awards. As Diz Mirza turns a year older, we wish her a Happy Birthday!

(The above story first appeared on LatestLY on Dec 09, 2019 08:15 AM IST. For more news and updates on politics, world, sports, entertainment and lifestyle, log on to our website latestly.com).