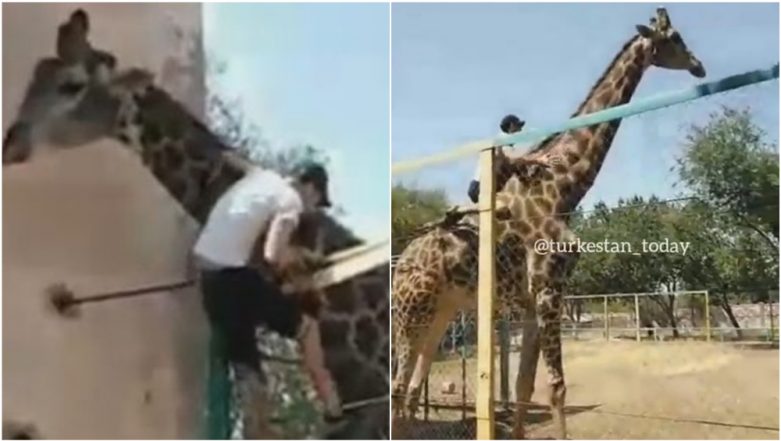 Watching a giraffe if you have never seen one before can get exciting. But a drunk man's excitement level crossed all limits recently at the Shymket zoo in Kazakhstan. A man was captured on video climbing up on the fence of the giraffe enclosure and trying to get a ride by sitting on the long neck of the animal. The giraffe although was gentle at first, eventually tossed the man to the ground. The video footage of this bizarre stunt is since then going viral online. Giraffe Falls Into Deep Trench in Chennai's Vandalur Zoo, Suffocates to Death.

Police are now on a hunt for this drunk visitor. In the video, the giraffe is seen standing close to the fence and the man begins to climb. The man somehow scrambled to reach the top of the fence and began stroking the animal's neck. The man did not stop there, he then crossed over the fence and landed on the giraffe's neck. The giraffe probably realised the ruckus this intruder was going to cause him and as he walked away, dashed the man away from its back! The man is then seen scrambling on the fence to make an escape. American Trophy Hunter is 'Proud' of Killing Rare Black Giraffe, Defends Her Viral Pic With Slain Animal!

Watch The Video of Drunk Man Attempting to Ride on Giraffe's Back:

The footage is indeed shocking and also raises a question on the zoo's security. Local media mentioned that he was drunk. The man has managed to escape but the police confirmed that he will face an arrest for his stunt. The Shymket zoo is one of the most respected in the country and a famous tourist spot. It boasts of having close to 1500 animals in their enclosure with professional care for over 20 species of endangered animals.