Elon Musk's Tesla Introduces Satin Shorts, Space Company CEO Thinks Wearing it to Stakeholders' Meeting Would be 'Next-Level' When Challenged by A Twitterati!

Elon Musk, the CEO of Tesla and Space X has unveiled a pair of red satin shorts on Tesla's online store. What surprised Twitterati is the fact that he also tweeted that he also bought a pair. Also, one Twitter user dared him to wear satin shorts to a stakeholders' meeting. Responding to the man, Musk answered, "That would be next-level." 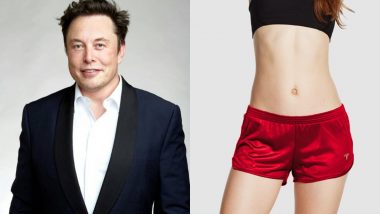 Elon Musk, the CEO of Tesla and Space X has unveiled a pair of red satin shorts on Tesla's online store. The shorts came after Musk hit out at securities regulators and short-sellers in a series of tweets celebrating his firm's rise as the world's most valuable carmaker. Keeping his promise to produce a pair of "short shorts" he gave it back to investors who had bet against Tesla Inc, by introducing the item on Sunday among the range of branded apparel for sale. However, what surprised Twitterati is the fact that he also tweeted that he also bought a pair, size XL, for himself. Also, one Twitter user challenged him to wear red satin shorts to a stakeholders' meeting. Responding to the man, Musk answered, "That would be next-level." Elon Musk Twitter Spree Costs High! Company's Shares Tumble After Billionaire Tweets 'Tesla Stock Price Too High'.

Musk had tweeted earlier saying, "Tesla will make fabulous short shorts in radiant red satin with gold trim." The tweet was a dig at- mocking short-sellers who borrow and then sell stocks, hoping a decline in price so they can buy it back at a cheaper rate. Introducing the shorts, he wrote that a pair of the limited edition satin shorts would cost "only $69.420", probably referring to $420 per share price that he had offered shareholders in 2018. Elon Musk Trolls Warren Buffet on Twitter Saying He is 'Super Super Serious' About Starting a Candy Company.

I bought a pair of XL

There Comes The Challenge!

Double-dare you to wear them at shareholder meeting 😁

That would be next-level 🤣🤣

Description of the shorts that come in various sizes read, "Run like the wind or entertain like Liberace with our red satin and gold trim design." The shorts are currently out of stock. Musk has multiple times joked about 'short shorts' to short-sellers who took against Tesla, such as hedge fund manager David Einhorn. Meanwhile, Tesla shares have surged 189 per cent this year.

(The above story first appeared on LatestLY on Jul 07, 2020 02:49 PM IST. For more news and updates on politics, world, sports, entertainment and lifestyle, log on to our website latestly.com).