Ex-Porn Star Zoe Parker Dies 'In Her Sleep'; Know More About the Former Adult Actress Who Was About to Start a New Life with Her Family 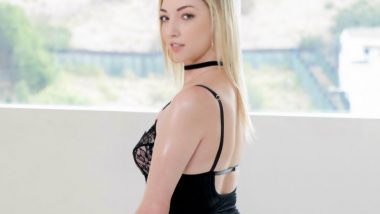 Ex-porn star, Zoe Parker dies 'in her sleep' on Saturday. Her fiance revealed that the former adult film actress passed away in her sleep in the description of a GoFundMe page. Her fiancé wanted to raise money for funeral costs and therefore set up a GoFundMe page. Zoe who had recently left the adult film industry in Los Angeles, wanted to start a new life and be closer to her family and this news of her death came as a shock to her fans and loved ones. Zoe Parker was just 24 and it had only been months after leaving the industry. Jay Campbell, her fiance from Weatherford, Texas, announced fiancee's death on GoFundMe and revealed that she 'passed away in her sleep' at around 2 am on Saturday.

Campbell wrote: "After leaving the adult industry, Zoe Parker moved back home to Texas to be near her family to start a new life. She had started doing great and recently announced her engagement and by all accounts seemed truly happy for the first time in her life."

Heartbroken to hear of the passing of Zoe Parker. We're sending our strength and love to her family, loved ones, and fans. If you'd like to donate to her funeral expenses https://t.co/be3sF61alb

"I loved that you weren’t afraid of being exactly who you were. You had such an impact on those around you, such a light in life, I will miss you so much. My heart breaks knowing you won’t be in my life anymore", wrote one of Zoe’s friends paid tribute on her Facebook page.

(The above story first appeared on LatestLY on Sep 15, 2020 03:18 PM IST. For more news and updates on politics, world, sports, entertainment and lifestyle, log on to our website latestly.com).