AYUSH Ministry Suspended One of Its Doctors Mujahid Hussain? PIB Debunks Fake News, Here’s the Truth Behind the Viral Post 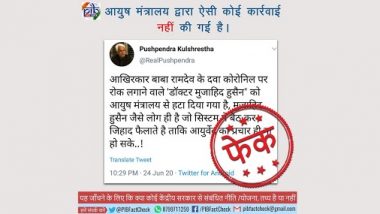 New Delhi, June 25: A viral post is doing rounds on social media platforms claiming that the AYUSH Ministry has suspended one of its doctors over a recent incident. The viral tweet, which is spreading the misinformation on social media, claims that the doctor who has been suspended by the AYUSH Ministry was the one who halted the success of COVID-19 treatment medicine Coronil that was launched by Patanjali Ayurved. The fake tweet claimed that the doctor, who halted the success of Patanjali by issuing a order asking for its details, has been removed from the Ministry of AYUSH.

The fake information was shared by a Twitter user who goes by the handle @realPushpendra. The user added saying that the doctor of the AYUSH Ministry who has been suspended from duties was named as Dr Mujahid Hussain. He further went on to say that such doctors in the Ministry are not letting Ayurved to get required importance. From Patanjali's Coronil to Glenmark's FabiFlu, Recent Breakthroughs in COVID-19 Medicine Research in India.

On June 23, hours after the launch of COVID-19 medicine Coronil and Swasari_vati, the AYUSH Ministry had asked the firm to provide the details, telling it to stop advertising it till the issue is examined. During the launch, Yoga Guru Baba Ramdev had said the medicines were developed by Patanjali Research Center, Haridwar in association with privately-owned National Institute of Medical Science, Jaipur. He had said Coronil, taken along with another product developed by the firm, had shown a 100 percent success rate in clinical trials on infected patients, except those on life support.

The PIB Fact check reveals that according to the Ministry of AYUSH, no doctor or medical officer has been removed from any duty or service.

(The above story first appeared on LatestLY on Jun 25, 2020 05:05 PM IST. For more news and updates on politics, world, sports, entertainment and lifestyle, log on to our website latestly.com).