Sir Ganga Ram Hospital Doctor Issued Prescription With List of Medicines to Take if You Get Mild Symptoms of COVID-19? Viral WhatsApp Message Is Fake, Here’s the Truth 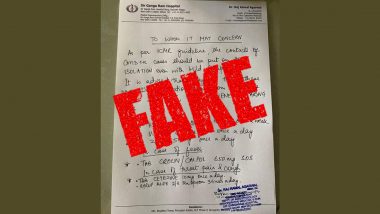 New Delhi, June 12: At a time when the country is battling the coronavirus pandemic, fake news and misinformation related to COVID-19 is being widely circulated on social media platforms like Facebook, Twitter and majorly on WhatsApp. In a latest such case, a viral message was being circulated on WhatsApp claiming that Sir Ganga Ram Hospital in Delhi has prescribed a list of preventive medicines apart from maintaining social distancing, hand hygiene and wearing masks. The fake message claimed that the hospital has issued the medicines in accordance with the guidelines by the Indian Council of Medical Research (ICMR). Can Overusing Hand Sanitisers Affect Your Bacterial Resistance and Weaken Your Immunity? Everything You Need to Know!

Here's the Clarification by the Hospital:

It has been brought to our notice that someone has circulated a fake image and forged the doctor's signature. #SGRHIndia strongly dissociates it self from such messages. pic.twitter.com/2obOptXxhp

The fake prescription by the Sir Ganga Ram Hospital, which is doing rounds on WhatsApp groups, urges people to take hydroxychloroquine 400 mg tablet once a week, Vitamin C tablet once in a week among other preventive medicines. The fake message also prescribes medicines for people who develop case of high fever or throat pain and cough.

A lot of fake news and misinformation related to coronavirus is doing rounds on social media amid the pandemic. Readers are advised not to believe in such fake rumours and false news.

Fake message has been circulated and doctor's signature has been forged. SGRH strongly dissociates it self from such messages.

(The above story first appeared on LatestLY on Jun 12, 2020 09:31 AM IST. For more news and updates on politics, world, sports, entertainment and lifestyle, log on to our website latestly.com).