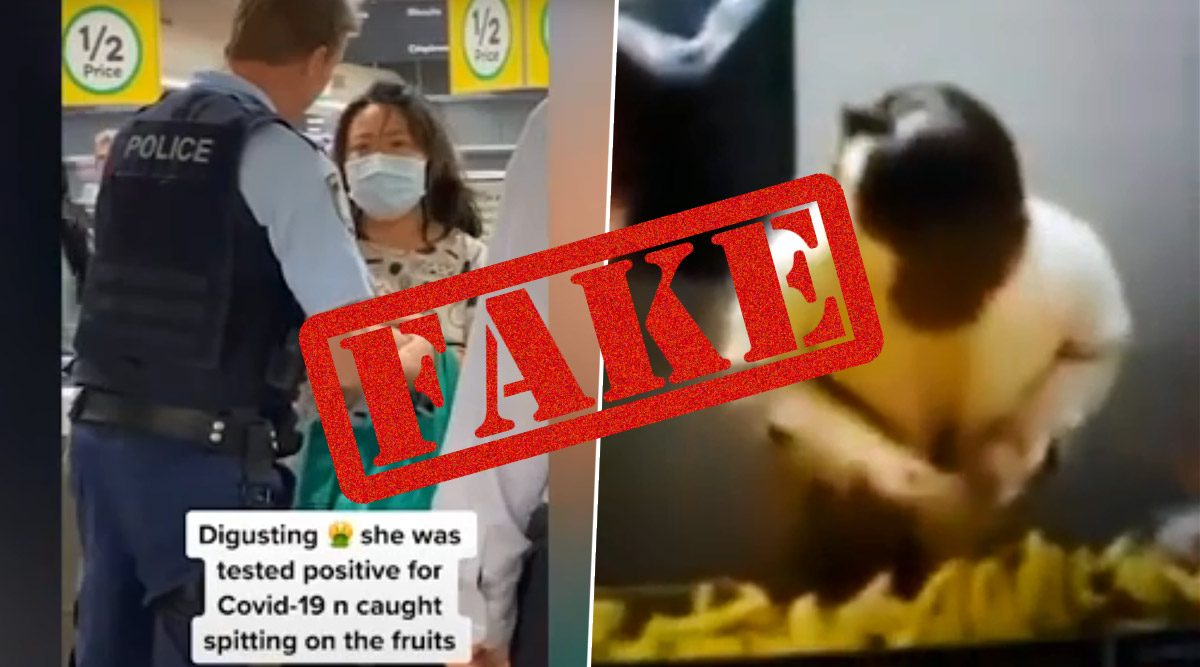 A video which was being widely shared on social media claimed to show a 'Chinese' woman shopper spitting on bananas kept on the rack at a supermarket. As per videos going viral on social media, the 54-year-old woman had "tested positive for COVID-19" and was arrested for spitting on fruits in a Sydney supermarket. However, after the news spread, it has since been revealed that the viral video is edited to include two women from separate incidents. The first part of the video is from Gordon located in Sydney's north. It was shot on March 19 wherein the woman refused to follow police instructions. She was arrested but later released without charge. Fact Check: Bananas Prevent Coronavirus Infection? Viral Video Claiming Australian Research Stated Bananas Can Help Prevent COVID-19 Is FAKE; Here’s the Truth.

Meanwhile, the second part of the video is a blurred CCTV footage of a woman spitting or sneezing on bananas in a supermarket. As reports claiming both women to be the same started doing rounds on the internet, some social media users pointed out that both the women were wearing different outfits. As the videos went viral, racist tweets and videos calling her 'Chinese' began to be shared widely on social media platforms.

A picture of a chinese woman with #COVIDー19 Spitting on fruits at a Supermarket. She was caught by the police i have never seen a demonic and wicked humanbeing on this earth like this woman in this video. @alashock pic.twitter.com/TAcmZzZkmi

Various Tweets Accusing The Woman of Spreading COVID19 Was Posted:

And? I've been to china its disgusting, coughing and spitting everywhere. The woman in half fake video spitting on veg was chinese, infected or not its disgusting

Sad state of mind set, this #COVID19 positive #Chinese woman spitting on fruits in a super market of #Australia.@AboutIndia if true, it's shame for Mankind https://t.co/uK2jP1ilYa

Woman Appearing to Spit or Sneeze on Bananas in a Supermarket:

In the clip where the woman is seen holding shopping bags, the cop is heard saying, "Put your hands out! You're resisting arrest. Do you understand that? I told you five times, just listen." To which the woman replies, "I did not do anything wrong."

A New South Wales Police spokeswoman told Daily Mail Australia that she was arrested after a "disturbance" involving a staff member and refused to take instructions from the police and staff to leave the supermarket. The spokesperson said, "She refused, and the 54-year-old woman was arrested and taken to Gordon Police Station. She was spoken to about her behaviour at the store and released."

Video of Woman Being Arrested at Woolworths Supermarket in Australia:

The video was initially posted to TikTok was removed later. On March 25, the video of the woman spitting on bananas was posted to Twitter by controversial Australian sports and media personality Sam Newman with the caption, "'Racist', I hear you shout." The tweet was later deleted.

A video which was being widely shared on social media claimed to show a 'Chinese' woman shopper spitting on bananas kept on the rack at a supermarket. It was shared with the video of a woman getting arrested. It was said that the woman was arrested for spitting on bananas.

Both were separate incidents and did not happen on the same day.