A video purportedly showing a microchip reader used for chipped animals detecting a chip in a vaccinated woman's arm is going viral on social media platforms. 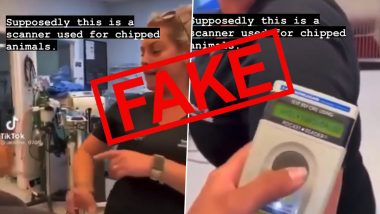 New Delhi, July 1: A video purportedly showing a microchip reader used for chipped animals detecting a chip in a vaccinated woman's arm is going viral on social media platforms. The video, which first appeared on TikTok, is circulated with people cautioning others regarding taking vaccines against coronavirus (COVID-19). However, a fact-checking website has debunked the claim that the microchip reader had detected a chip in the vaccinated woman's arm. COVID-19 Vaccine, RT-PCR Test Make Your Body Magnetic? Metal Objects Getting Attached to Nashik Man's Torso, Health Officials Say No Correlation With Vaccination.

The viral video shows two women; one with a microchip reader that is used to track and detect chip in pets in case they get lost. When the woman with microchip reader scanned the right arm of the other woman, the words "NO ID FOUND" appears on the scanner. When the left arm, which she says on the video is where she was vaccinated, is scanned, the number 985141003154180 appears on the screen. COVID-19 Vaccine Makes Vaccinated Arm Generate Electricity? PIB Fact Check Debunks Fake Claim, Reveals Truth Behind Viral Video.

The clip indicates as if the microchip reader detected a chip in woman's arm where she was injected a vaccine. To find the truth, Lead Stories, a fact-checking portal, checked the particular number using petmicrochiplookup.org. The results showed that the number belongs to a microchip made by a company called HomeAgain. It is the same company that makes pet scanners like the one seen in the video.

"Microchip numbers, a large majority of them are going to start with the number 9 and they're going to be 15 digits long. So this is why this one reads like a microchip number. But it says that it's an unusual number, so most likely it belongs to a whole bunch of microchipping companies, but I have no information particularly on this microchip," a representative of HomeAgain was quoted as saying.

The fact-checking portal also found out that the number that appeared on the scanner was not yet registered to anyone. In simple words, the number belongs to an unregistered chip to be used for animals. However, there is no link between the chip and the vaccination.

There is no evidence to link chip with vaccination.

(The above story first appeared on LatestLY on Jul 01, 2021 03:33 PM IST. For more news and updates on politics, world, sports, entertainment and lifestyle, log on to our website latestly.com).