Fact Check: Video of Huge Waves Crashing Over a Bridge is Not Bandra-Worli Sea Link During Mumbai Rains, Know Truth About the Viral Clip 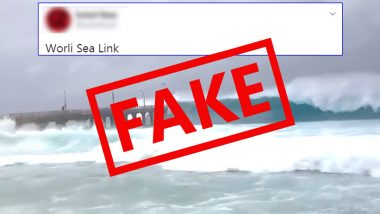 The city of Mumbai has been lashed by severe rains accompanied by strong winds over the last two days. On August 4, parts of the city saw severe floods and waterlogging. A lot of people took to social media to share pictures and videos of the situation from different parts of the city. Among them, a particular video of strong waves crashing over a bridge and engulfing it has been shared online calling it the Worli Sea Link. But before it spreads panic, let us tell you, it is a fake claim. The video is not from Mumbai but an old video from Lakshadweep from years ago. In fact, the video often resurfaces after there is a huge spell of rains. So before it sets panic, let us remind you it is a fake claim. Mumbai Rains: Nair Hospital Flooded, Colaba Region Receives Heaviest Single-Day Rain in August in 46 Years (Watch Video).

The video shows fierce waves taking over a bridge and a biker is seen riding on it. It appears to swallow the bridge entirely at a point with the huge crashing waves. The video has been shared on Twitter with a claim that it is from Mumbai's Bandra-Worli Sea Link. If you look closely you will realise that it is a fake claim as the bridge is much smaller in height compared to the Mumbai sea link. Moreover, there is a biker riding on the bridge, which is not allowed on Mumbai's sea-link. The big suspension wires on the bridge are also missing. The original video is from Lakshadweep from August 2017.

Some have shared the above clip as a shocking video from Mumbai monsoons. But some were aware and brought it to the notice in the comments that it is a fake video. The video is very much real but the claim that it is from Mumbai's Bandra-Worli Sea link is fake. The original video is from Lakshadweep from August 2017 after heavy rains in the region.

So if you come across this video on your social media or over WhatsApp claiming to be from Mumbai, bring it to the notice of the sender that it is a fake claim. Such videos can cause more fear and spread panic among some residents so do not pass them along with wrong claims. Be aware in these tough times about such fake reports, pics and videos which often resurface during such calamitous times.

Viral Video of huge waves crashing over bridge is from Mumbai.

It is an old video from Lakshadweep.

(The above story first appeared on LatestLY on Aug 06, 2020 12:03 PM IST. For more news and updates on politics, world, sports, entertainment and lifestyle, log on to our website latestly.com).