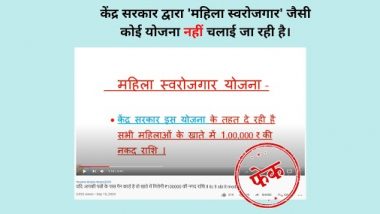 New Delhi, September 19: A viral post is doing rounds on social media platforms claiming that the government is providing Rs 1 lakh rupees to all women in their bank accounts. The fake claim states that the government has undertaken this initiative of transferring the amount under the Mahila Swarozgar Yojana under which Rs 1 lakh rupees will be transferred to the bank accounts of all women. The claim states: 'Under the Mahila Swarozgar Yojana', the Central Government is giving 1 lakh rupees to all women in their bank account'. Excise Department Has Announced Over 70,000 Appointments in All States? PIB Fact Check Reveals Truth Behind Fake WhatsApp Message.

Dismissing the fake claims, a fact check by Press Information Bureau (PIB) informed that this claim is fake and no such announcement has been made by the government. Issuing a clarification, the fact check has categorically denied the claim and termed it to be completely false and said that no such scheme as women self-employment is being run by the central government.

Ever since the outbreak of coronavirus in India, fake news and misleading post have been widely circulated on social media platforms including Facebook, Twitter and WhatsApp among others. The government has time and again requested people not to believe in such rumours and not to fall a prey to such misinformation.

Claim: Under the Mahila Swarozgar Yojana, the Government is giving 1 lakh rupees to all women in their bank account.

A fact check by PIB states that this claim is fake as no such scheme as women self-employment is being run by the central government.

(The above story first appeared on LatestLY on Sep 19, 2020 06:01 PM IST. For more news and updates on politics, world, sports, entertainment and lifestyle, log on to our website latestly.com).