Picture of 'View of California Wildfire Above The Clouds' is Shared With a Fake Claim, Know Truth About This Viral Photo 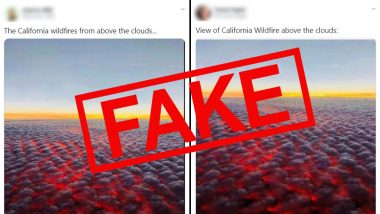 Over the last few days, terrifying footage from the wildfires from Oregon and California is being shared online. The hazy skies turning orange and red and the thick smoke everywhere is all over the Twitter timeline. But among them is an image of red clouds being circulated online with claims of them being clouds over these raging fires. An aerial picture of a layer of red clouds in the sky is being shared on Twitter with claims like, "California fire view above the clouds" or "The California wildfires from above the clouds." Although the picture is impressive the said claims are fake. The picture is from a splendid sunset from Hawaii. TERRIFYING! Drone Footage of Eerie Orange Skies in San Francisco Due to California Wildfires Looks Straight Out of an Apocalyptic Movie (Watch Viral Video).

An old picture of a sunset has been passed along with fake claims of the aftermath of California wildfires. There are numerous pictures and videos of Californian wildfire disaster and they look quiet terrifying. But let us tell you the picture of red clouds is definitely not from the disaster. The same picture has been shared on Facebook as well. And it does not take long for it to be shared and thus passed along. Some users have shared it with captions like, "Hell on Earth". Firenado in California! Viral Video of Wildfires Resulting in Tornado Looks Terrifying, Know What Causes a Fire Whirl or Fire Devil.

Check The Tweets About This Picture Here:

The California wildfires from above the clouds... pic.twitter.com/udbzfLrZhe

View of California Wildfire above the clouds: pic.twitter.com/tMSMZtIKcI

California Forrest fires above the clouds, looks like hell on earth pic.twitter.com/b1P5WDZn4z

Now if you do a reverse search of the same image on Google, it points to similar tweets from years ago. So it is definitely not a recent picture. The original picture belongs to Nathan Province from Hawaii. The picture has nothing to do with wildfires, but its from an incredible sunset taken from a plane. AFP even quoted the original photographer on taking this picture.

Here's The Original Picture From 2018:

So be rest assured that the pictures are not a result of Californian wildfires. Although, this doesn't reduce the amount of damage that the fires have already caused in the area. A pyrocumulonimbus cloud formation was indeed seen over the Creek Fire formed by the fire smoke. But clouds have not turned red due to the fire underneath.

Picture of red clouds is taken after Californian wildfires.

It is an old picture from a sunset in Hawaii.

(The above story first appeared on LatestLY on Sep 17, 2020 08:10 PM IST. For more news and updates on politics, world, sports, entertainment and lifestyle, log on to our website latestly.com).