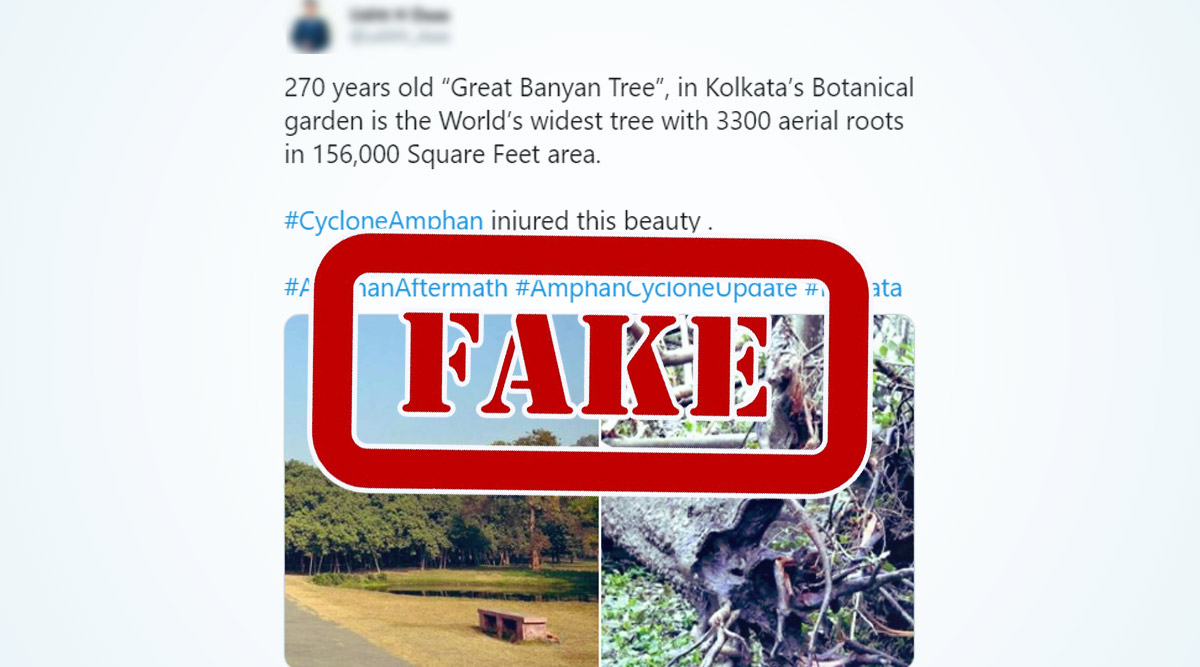 The Great Banyan Tree in Kolkata’s Botanical Has Not Been Damaged (Photo Credits; @uditth_daas/ Twitter)

The Amphan cyclone which hit West Bengal this week has severely damaged many things including trees and buildings across the state. Rescue team continue their restoration work across districts, especially in the capital city of Kolkata and in the south, areas that have been worst hit by the cyclonic storm. Amid the straining situation, it was reported that the Great Banyan Tree in Kolkata’s Botanical Garden was also damaged. In this grieving situation, people in the state were shocked to hear the world’s largest banyan tree aged 270 years to be damaged by the cyclone. However, a park employee issued a clarification through a viral video saying that the Great Banyan Tree is fine, and it has not been affected by the strong wind.

Last night, news surfaced on the internet, after PTI quoted scientist of Botanical Survey of India, Shiv Kumar. He said the Howrah’s botanical garden has worst affected the park, including the Great Banyan Tree. He added that the Amphan has badly damaged the density of the tree’s peripheral stem and branches. Kumar said the exact damage could be ascertained only after its closer inspection. A Twitter user as well shared an image of a broken tree, that the cyclone has uprooted the Great Banyan.

Now an employee working at the Botanical garden has clarified that the tree is fine. In the viral video, he agreed that the Amphan had caused severe damage in the garden too, damaging many trees, but it could not affect the Great Banyan Tree. The man further urged everyone to not believe in everything without verification during this situation of crisis.

The Acharya Jagadish Chandra Bose Indian Botanic Garden in Howrah, Kolata is dedicated to the cultivation, preservation and display of a wide range of plants labelled with their botanical names. Its heart, the Great Banyan Tree had survived two significant cyclones in 1864 and 1865, when some of its branches were broken. Now with the employee’s clarification, the tree has also survived cyclone Amphan which has created havoc across the state, when it is already struggling to fight the transmission of the novel coronavirus.

No, the Great Banyan Tree in Kolkata's Botanical Garden is fine. Although the garden has been damaged, the strong wind did not affect the tree.