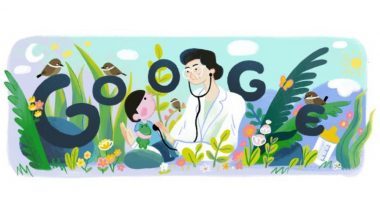 Google celebrated Filipino paediatrician Fe del Mundo’s 107th birth anniversary with a befitting doodle. To those who have never heard her name before, Fe was the first woman in the world to be admitted into the prestigious Harvard Medical School. She was one of the most revered physicians in the Philippines and is credited to have founded the first paediatric hospital in the country. For her tireless contributions, Fe was awarded the prestigious Ramon Magsaysay Award for public service and the rank and file of National Scientist of the Philippines.

Fe was born in Manilla, Philippines on November 27, 1911, as Fé Primitiva del Mundo y Villanueva. She was inspired to pursue medicine by her older sister who couldn’t realise her dreams of becoming a doctor herself. She went on to revolutionise paediatric medicine in her country and devoted her life to children’s healthcare. Thanksgiving 2018 Google Doodle Captures the True Essence of Holidays, Family Gatherings and Feasting.

The world-renowned doctor, who happened to be the first woman in Harvard Medical School, came back to her motherland after completing her studies. She set up a hospice during World War II, which treated 400 children detained at the University of Santo Tomas. She was given the title of “The Angel of Santo Tomas” for caring for the detainees.

While she was appointed the director of a government hospital, she was quickly dissatisfied with the prevalent red tape-ism. So she sold her house and belongings to set up the first paediatric hospital in Philippines.

Even at the ripe age of 99 when she was wheelchair-bound, she took rounds of the Children’s Medical Center in Quezon City, where she lived.

In her free time, she taught students, published research papers and authored books, one of which was ‘Textbook of Pediatrics.’ She also founded the Institute of Maternal and Child Health, where doctors and nurses in paediatrics were trained. She also became the first woman in the country to be conferred with the title of National Scientist of the Philippines. She died of a cardiac arrest on August 6, 2011,  just months away from her 100th birthday.

(The above story first appeared on LatestLY on Nov 27, 2018 07:26 PM IST. For more news and updates on politics, world, sports, entertainment and lifestyle, log on to our website latestly.com).