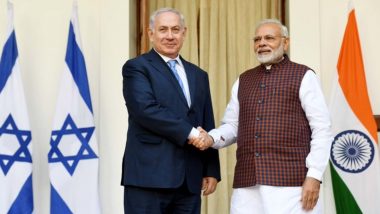 "May our #Friendship & #GrowingPartnership strengthen even more in future!" read a tweet from Israel in India account. A video showing pictures of Israeli Prime Minister Benjamin Netanyahu and Ron Malka, Israel's Ambassador to India, with Prime Minister Narendra Modi was also shared in the same tweet. "Share a picture telling us what makes Isreal-India friendship so special," the tweet urged citizens of both the countries.

May our #Friendship & #GrowingPartnership strengthen even more in future!

"Thank you and wishing a Happy Friendship Day to Israel's wonderful citizens and my good friend (Israeli Prime Minister Benjamin Netanyahu." "India and Israel are time tested friends. Our bond is strong and eternal! May the friendship between our nations grow and prosper even more in the times to come!" the Indian Prime Minister had said.

(The above story first appeared on LatestLY on Aug 02, 2020 03:31 PM IST. For more news and updates on politics, world, sports, entertainment and lifestyle, log on to our website latestly.com).