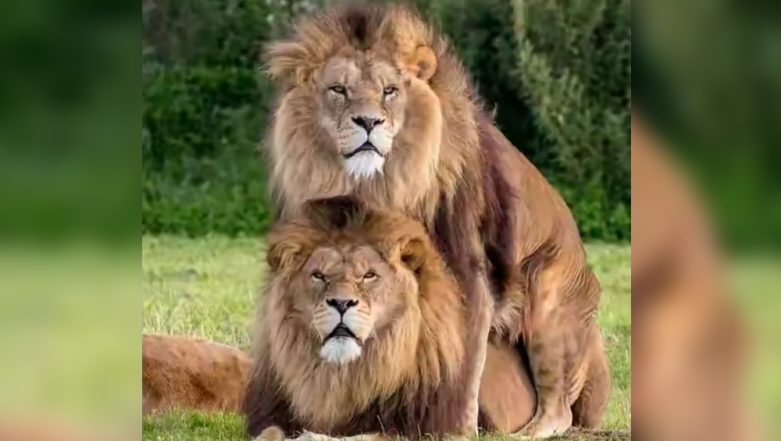 Love is love, and it is high time we must acknowledge the natural bond. Another video of non-humans of same-sex engaging in an amorous embrace is roaring gay pride on the internet. This is not something you see every day—a male lion appearing to mate with another male lion. The incredible video of the two male lions is going crazy viral online, with over 3 million views on Twitter reminding us that the bond is natural. People began to add their own spin on the caption while sharing it on the social media platforms. Gay Penguin Couple Adopt Abandoned Egg in Berlin Zoo After Caring for it Since July.

The clip begins with a lion mounting what seems to be another male lion. As it continues, towards the middle of the clip, a lioness with no mane enters and attempt to nuzzle the lion on the bottom. The lion on top chases the lioness off. The person behind the camera can be heard giggling at first and then gasping. It is although unclear when and where the video was shot. But it had all the drama, aside from humping. World's Largest Cat, a Lion-Tiger Cross Breed Weighs 319 Kgs! Video of Apollo, The Huge Liger From South Carolina Goes Viral.

Sis pulled up to the scene w/ questions. pic.twitter.com/ILXLf5QsbL

We cannot assuredly say what happened here is between two male lions. Because, experts have suggested that even female lions have manes. Again, a lot of times, male lions have been spotted mounting on one another in the wild as a type of bonding within the pack, but not in a sexual way. Live Science explains such a rare moment of social bonding between the male lions called coalitions. They are typically affection with each other. They will flop down on each other, lick and even rub each other’s faces, the study further explained. And female lions do it too.