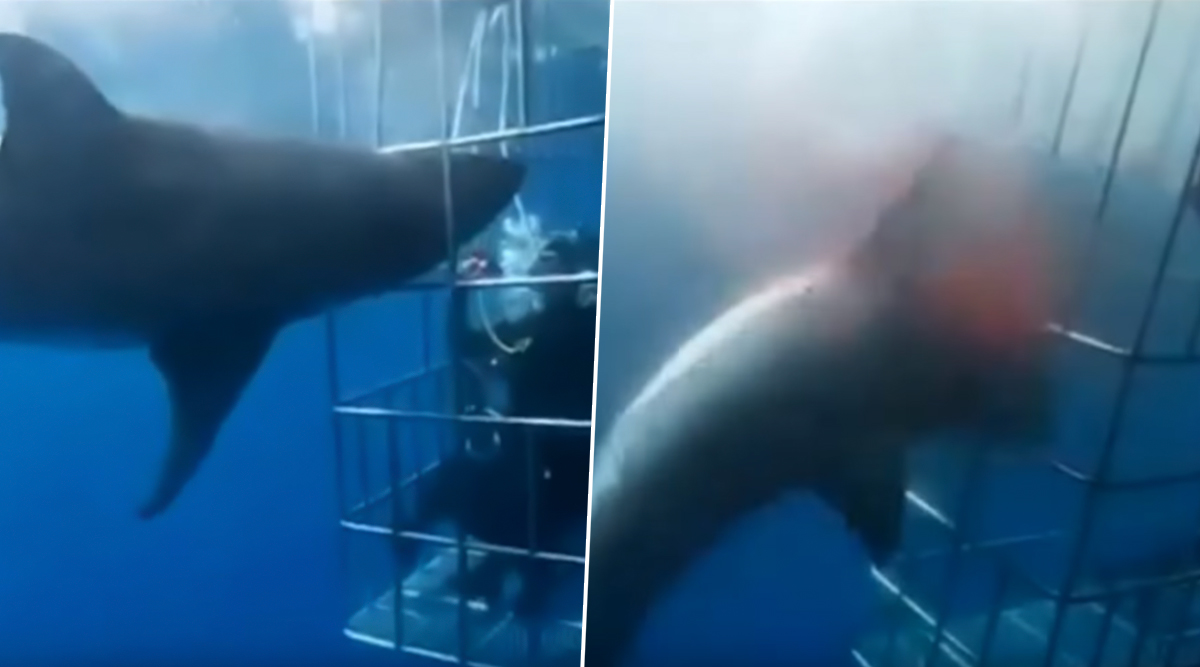 A video of a great white shark bleeding to death after lunging at divers has sparked outrage against the shark cage diving company. The incident took place in Mexico's Guadalupe Island a few months ago. Four divers were inside a cage underneath when a great white shark came lunging towards them. The gills of the fish got stuck in the bars of the cage, which led to heavy bleeding and eventually cause its death. The footage is indeed distressing and now environmentalists are questioning the nature of these cages. Photographer Captures Great White Shark off Mexico West Coast, Recreates Iconic 1975 Movie Jaws' Poster (See Picture).

The great white shark is on the International Union for Conservation of Nature Red List. Nautilus Dive Adventures had undertaken the dive and this is the first time they experienced such violent behaviour of the sharks. Mexican environmental activist Arturo Islas Allende has slammed them for not following the safety standards about the kinds of cages that should be used. He posted two videos of the shark attack on his social media questioning the practice. Netizens also expressed concern about such dangerous activities which destroy nature and the natural habitat for these marine beings. Narrow Escape For Boy After Great White Shark Leaps Out of Water at Cape Cod Bay, Almost Bites Him (Watch Video).

Watch Video of Great White Shark Bleeding to Death After Being Stuck in Cage:

It is indeed distressing to see the shark trying hard to make an escape but more blood oozing out. The fish eventually dies and its corpse is seen collapsing underwater. As per local reports, the shark was stuck in the bars for more than 20 minutes.

The owner of the ship which was involved in this incident said that this is the first time the crew encountered a great white shark that was "strangely aggressive, attacking one of the cages used by our company to dive at Guadalupe Island". They added that the ship was following all the laws and had all the permissions regarding the granting of preservation of the great white shark.

Shark cage divings are undertaken as a part of conservation and prevention of the species. Other than scientific purposes, there are several places, which offer it is as an adventure activity for tourists. The observer is enclosed in a cage so that they cannot make any contact with the fish. There is a bait attached at a distance to attract them near the cage.