Greta Thunberg did not seem to have been very pleased with his unexpected visit. A video of her evil-eying the POTUS has gone viral on social media platforms. 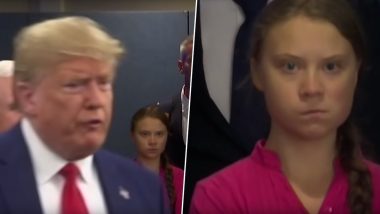 Swedish teenager, Greta Thunberg who has become the face of activism against climate change is making fiery speeches, accusing world leaders of their inaction in containing global warming. On Monday the 16-year-old was at the UN Climate Change summit in New York when she crossed paths with the United States President Donald Trump. The Swedish environmental activist didn't seem very pleased with his unexpected visit. A video of her evil-eying the POTUS  has gone viral on social media platforms. As the clip is being shared widely on social media platforms, Twitterati termed it as the "best GIF ever" to express dissent. Meanwhile, Trump took to Twitter, wishing Greta a "bright and wonderful future". Greta Thunberg Moves World Leaders at UN Climate Change Summit With 'How Dare You!' Lament: Read Full Text of Her Speech.

Trump tweeted saying, "She seems like a very happy young girl looking forward to a bright and wonderful future. So nice to see!" Greta arrived in New York on a zero-emissions yacht to reduce carbon footprints caused by her. Before her departure, the 16-year-old said that she had no plans to speak to Trump during her time in America. Last month, Greta said that Trump "obviously" doesn't listen to science when assessing global warming. During her speech, she said, "We are at the beginning of mass extinction and all you can talk about is money and fairy tales of eternal economic growth - how dare you!" Who Is Greta Thunberg and Why Has She Been Nominated for the Nobel Peace Prize?

Greta Thunberg Stares The US President Donald Trump at the UN Summit:

We are all Greta Thunberg.

Check Out US President Donald Trump's Tweet on Greta Thunberg:

She seems like a very happy young girl looking forward to a bright and wonderful future. So nice to see! https://t.co/1tQG6QcVKO

Greta Thunberg’s glare at Donald Trump is giving me the energy to get through this Monday pic.twitter.com/xdM0rdI2ln

Greta Receives a Thumbs Up From Twitterati:

Thank you @GretaThunberg, for not only saying what needs to be said, but for looking at Donald Trump EXACTLY as I would if that deceitful gargoyle ever crossed my path.pic.twitter.com/LSje6BY27u

A Gesture Said it All!

Good job young Lady, the world needs more of your kind. Keep up the good work and ignore troll's like Orange Trump. pic.twitter.com/xM6nVNlULy

All With a Look!

Bless whoever got this footage of Greta Thunberg eyeing Trump pic.twitter.com/1XEjz7hyoG

And Still Gets Praised!

Trump didn’t even acknowledge Greta. He blew past her as though she was invisible.

This GIF is so symbolic of so many things — the greed, power, avarice and narcissism which may deny an entire generation an existence, as well as the righteous anger from below. https://t.co/u8zQD1hzoL

The Best Stare on The Internet!

Teen climate activist Greta Thunberg said it all with her eyes when she saw President Donald Trump at the United Nations Climate Action Summit on Monday.

The 16-year-old shot the U.S. president a death stare... pic.twitter.com/uYICwlXHvj

Attacking the responsible authorities, Greta said, "My message is that we'll be watching you. I shouldn't be here. I should have been back at school, on the other side of the ocean. Yet you all come to us young people for hope. How dare you?" Over the past two years, Greta has become quite popular for her efforts in addressing climate change. She had started by handing out leaflets outside the Swedish Parliament. Her efforts prompted children around the world her age to conduct protests demanding a better future.

(The above story first appeared on LatestLY on Sep 24, 2019 10:43 AM IST. For more news and updates on politics, world, sports, entertainment and lifestyle, log on to our website latestly.com).