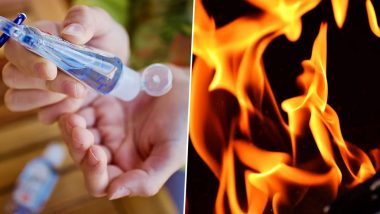 Using hand sanitizers has become a norm in this time of coronavirus crisis. Every person has been compulsively using these sanitizers to keep themselves safe from the germs. But there have been repeated instructions to stay safe from fire when applying the hand sanitizers as they have high percentage of alcohol. A woman named Kate Wise in Texas was left with horrifying burns all over her body when she tried to lit a candle nearby. The bottle of hand sanitizer exploded while she was lighting the candle and left Kate in horrific burns. She is currently in Intensive Care Unit recovering from the situation. Fact Check: Can Hand Sanitizers Cause Fire or Explode in Car Heat? Know Truth About the Viral Claims and If It Is OK to Leave Hand Sanitizer in the Car?

The incident took place over the weekend at her home in Austin. Kate accidentally burned her hand and in a startled reaction took it back. But the bottle made contact with the fire and exploded, which resulted in severe burns all over her body. "Because of the hand sanitizer, it just lit my whole ... everywhere I had hand sanitizer on my hand, it just lit my hand with fire," she told KHOU11. Several portions of her body have second and third-degree burns. 18% of her body is covered in burns said the Round Rock Fire Department.

Coming up at 6-- Hear from a #RoundRock woman near #Austin as she recovers in the ICU. Kate says the hand sanitizer she had put on caught fire while trying to light a candle. It left her with severe burns. #KHOU11 pic.twitter.com/BknOZEta1E

The single mum of three, somehow managed to take off her burning clothes and rescue her daughters from out of the house. The fire has damaged most of the furniture in their house too. Kate's friend has launched a fundraiser online to help her in medical care and other expenses. She also hopes to raise awareness about the dangers of using the sanitizers near fire and the damage it can do. There have been instances of fire accidents due to sanitizers before as well. A man was admitted in Delhi after he used hand sanitizer near gas stove. The main received 35% burns when he was standing next to a stove after using sanitizers. So one should be really careful after using hand sanitizers and keep it away from any fire objects.

(The above story first appeared on LatestLY on Sep 05, 2020 02:40 PM IST. For more news and updates on politics, world, sports, entertainment and lifestyle, log on to our website latestly.com).