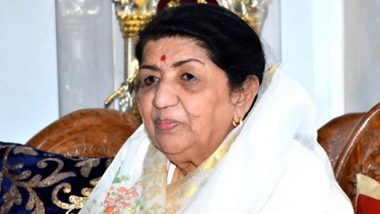 It is Lata Mangeshkar’s 91st birth anniversary this year on September 28, i.e. this Monday. Popularly known as the Nightingale of India, Lata Mangeshkar is known to be the finest voices in the music industry across the world. The legendary singer sung thousands of songs across languages in her illustrious career. As the notable playback singer celebrates her 91st birthday this year, we at LatestLY, bring you some of the most amazing things, and interesting trivia facts about Lata Mangeshkar, which you will find intriguing. Lata Mangeshkar Shares A Funny Anecdote Involving Her Niece To Break The Lockdown Tension (Read Tweet).

1. Born in Indore, Lata Mangeshkar’s name was ‘Hema’ during the time of her birth. Her parents changed her name after a female character ‘Latika’ from one of his father’s plays.

2. Not many people know that Lata Mangeshkar learnt her 1st music lesson when she was only 5.

3. It’s a little-known fact that Lata Mangeshkar had to leave her school on her very first day, as she took her younger sister, Asha, with her, too.

4. Lata Mangeshkar’s first Hindi song was ‘Mata Ek Sapoot Ki Duniya’, which she sung for a Marathi movie Gajabhaau in 1943.

5. For music lovers, it will interest you to know that Lata Mangeshkar took lessons of Hindustani classic music from Ustad Aman Ali Khan of Bhindibazaar gharana.

6. Lata Mangeshkar’s mentor Ghulam Haider once introduced her to a producer who rejected her voice citing it to be “too thin”. An annoyed Haider had then said “directors and producers would fall at her feet and beg her to sing”.

7. It was Haider who Lata Mangeshkar her first major breakthrough. It was the song ‘Dil Mera Toda, Mujhe Kahin Nahi Chora’ from the movie Majboor in 1948. She once said “Ghulam Haider is truly my Godfather”. Lata Mangeshkar Birthday: Lag Jaa Gale and Other Songs by the Queen of Melody That are Pure and Beautiful.

8. Many know Lata Mangeshkar has sung in Tamil language too. But do you know her first Tamil song? Well, the (dubbed) song was ‘Enthan Kannalan’ from the movie ‘Vanaratham’, which was a dubbed version of Hindi movie ‘Uran Khatola’.

9. Lata Mangeshkar was administered slow poison in 1962. She fell so sick that she was bedridden for 3 months, before she recovered completely.

10. Lata Mangeshkar had a feud with Mohammed Rafi in the 1960s over royalty payments given to singers then. She had sought support from Rafi, who outrightly rejected her idea. After singing a song for the movie Maya in 1961, the duo had decided to sing with each other for a brief time.

11. Of the many awards she received in her career, Lata Mangeshkar got her first National Award in 1973, for singing ‘Beeti Na Bitai’ from the film Parichay.

12. Not many people know that Lata Mangeshkar is the first Indian to stage their first music concert overseas. In 1974, she had her first concert at Royal Albert Hall in London.

14. Not many people know that the Madhya Pradesh govt in 1984, and Maharashtra govt in 1992, instituted an award in the name of Lata Mangeshkar.

15. Lata Mangeshkar’s name featured in the Guinness Book of World Records for a brief time in the 1970s, for singing the most number of songs in different languages.

Lata Mangeshkar, fondly called as Lata Ji, has been given a number of names over the years – Queen of Melody, Voice of the Nation, and Voice of the Millennium. There have been a lot of rumours about her health, but the Nightingale of India is still going strong. As she celebrates her 91st birthday today, we at LatestLY wish her to be in the pink of her health! “Happy Birthday Lata Ji!”

(The above story first appeared on LatestLY on Sep 28, 2020 08:10 AM IST. For more news and updates on politics, world, sports, entertainment and lifestyle, log on to our website latestly.com).