After suffering from a shoulder injury, Suga is back and how and his birthday had to be special. ARMY has been running drives to make Suga’s birthday memorable, while also sharing some throwback pictures and K-Pop videos of their favourite boy. 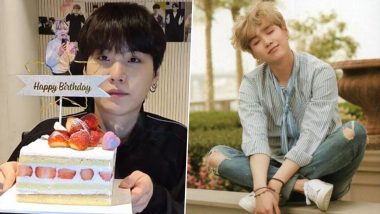 Happy Yoongi Day, ARMY! The lead rapper of BTS, Suga, turned 28 at the stroke of midnight KST on March 9. Members of the Bangtan Boys and fans rushed on social media to wish their favourite boy a very Happy Birthday. Much like all the other members of the K-Pop group’s birthdays, BTS Suga too enjoyed some special moments and some viral hashtags such as #HappyBirthdayYoongi, #SugaBirthday and more. After suffering from a shoulder injury, Suga is back and how and his birthday had to be special. ARMY has been running drives to make Suga’s birthday memorable, while also sharing some throwback pictures and K-Pop videos of their favourite boy.

ARMY is known for sharing their love in big ways! We have witnessed BTS members' past birthdays and hence are certain that Yoongi’s birthday would be nothing short of a grand celebration. Fans have set streaming goals for songs performed by the rapper, both on YouTube and Spotify. That includes some of his solo music, like “Daechwita” and “D-2.” Again, Suga’s Pakistani-based fans reportedly run a blood donation drive for the performer’s birthday, helping those in need.

Meanwhile, among BTS members, Jin was the first to take over social media to show off an adorably grumpy picture of Suga, whom he calls, “Yoonji,” noting that he was the first person to wish him on his birthday. RM too posted a picture of the two, doing hair and makeup while wearing matching sweaters. Check out how BTS members and K-Pop ARMY has been celebrating Suga’s birthday.

Happy birthday to you pic.twitter.com/fpCpBK24Mm

yoongis eyes going back and forth w the clapping good god pic.twitter.com/8eXN8mICUE

Y'all remember when bts did this 😭😭😭

There is no denying that Suga is one of the most talented members of the group. His songs are emotional, soul-soothing and honest. He is a true artist so deeply devoted to creating beautiful music. We wish our Yoongi, a very Happy Birthday!

(The above story first appeared on LatestLY on Mar 09, 2021 10:45 AM IST. For more news and updates on politics, world, sports, entertainment and lifestyle, log on to our website latestly.com).