It's BTS' Suga's birthday and so we decided rather than focusing on his many melodious tracks, we would stalk him on Instagram. Suga has some really cool clicks that ought to be shared with the world to increase the happiness quotient. 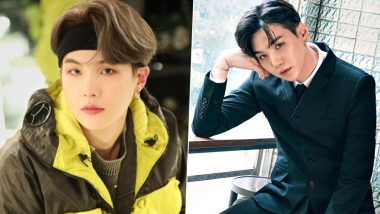 BTS is a craze that has not only put South Korea strongly on the global map apart from their dramas but also the member of the K-pop idol. They now enjoy a global fanbase with India too swaying to their beats. The rapper in the group Suga or Min Yoong-Gi celebrates his birthday today. He is also the person who has written songs along with other members of the band. A royalty by his own admission, Suga also has a wonderful sense of camera. Many of his pictures make you believe he is actually romancing it.  Grammys 2021: Taylor Swift, Harry Styles, BTS and More to Perform at the 63rd Annual Grammy Awards

So while you swoon over his many mixed tapes and BTS tracks, we thought of exploring the picture-perfect side of Suga in this feature. P.S. If you think your heart can race strongly because of him, please refrain from watching this. But then can you?

With a dash of gold

Some charm up for grabs

Eyes on the prize

The ARMY obviously has plans for Suga's birthday and it is said that they are looking to increasing the streaming hits on his videos.

(The above story first appeared on LatestLY on Mar 09, 2021 09:10 AM IST. For more news and updates on politics, world, sports, entertainment and lifestyle, log on to our website latestly.com).