Firefighters had to change their approach of dousing the fire since there were so many animals stuck inside. Instead of fighting out the blazes from the outside, they went in, which was definitely riskier. 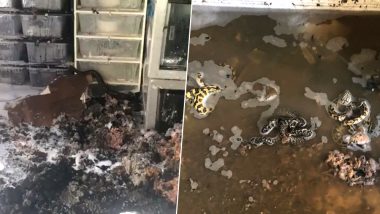 Firefighters are trained well for their task of dousing the fire and saving the lives of those stuck in the blaze. But recently firefighters in Arizona answered a fire call and they thought they were responding to a vacant house. But they were in for a quite a surprise, when the place was full of snakes and other reptiles. The Phoenix fire station officers had to be careful to rescue to the slithering reptiles all over the house. The incident took place at a home near 67th Avenue and Baseline Road. The house had more than a 100 snakes, along with lizards, birds and some cats and dogs. Photos and videos from this fire call were posted online. Woman Calls Firefighters to Rescue 'Huge Monitor Lizard,' Turns Out To Be a Small Gecko, View Pic!

Phoenix Fire Capt. Greg Hawk called this rescue like something straight out of a movie. "It really hit us that, you know, we were walking around with snakes and lizards and everything else. There were literally firefighters that were fighting fire, squirting water on the fire, and guys next to them picking up snakes and putting them in buckets," he told in a news report. And added that they had to change their approach of dousing the fire since there were so many animals stuck inside. Instead of fighting out the blazes from the outside, they went in, which was definitely riskier. Pet Python Escapes Home and Crawls on Roof in Detroit, Scary Snake Rescue Video Goes Viral.

Watch Pics and Videos of Firefighters Dousing Fire in House Full of Snakes:

Luckily none of the snakes bit the firefighters during the rescue. Although the firefighters were not able to save all the animals. As Hawk called it one of the 'craziest' calls in his service. "I mean, we see crazy stuff, and this was outside-of-the-box crazy for us," he said. These rescued reptiles are now kept with the Phoenix Herpetological Sanctuary who will take care of them. They also informed that none of these snakes were venomous. Sure, this fire call will be a memorable one for the fire department.

(The above story first appeared on LatestLY on May 21, 2019 01:25 PM IST. For more news and updates on politics, world, sports, entertainment and lifestyle, log on to our website latestly.com).