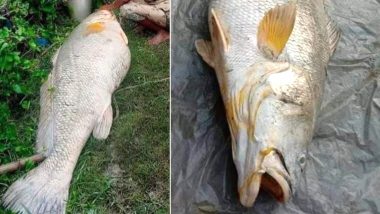 A woman in West Bengal had her fate turned overnight after she caught a huge fish weighing over 50 Kgs. An elderly woman named Pushpa Kar managed to make Rs 3 lakh by selling a rare catch of the huge fish weighing about 52 kgs. It's a fish locally called as Bhola which is commonly relished in the region. Bhola Macher Jhol is a very common delicacy in the region and no wonder, with such a big catch, it fetched a huge price. Pictures of the huge fish have been shared online on Twitter. 800 Kg Fish Found in India? Rare Fish Chilshankar Weighing Almost A Ton Caught in West Bengal’s Digha Auctioned for Rs 20 Lakh (Watch Video).

The incident took place in the Sagar islands in the Sundarbans area. Pooja Mehta, a reporter from the state posted pictures of the huge fish found by the woman. In her tweet, she mentions, "Pushpa Kar, a resident of Sagar Islands, Bengal caught a huge fish weighing 52 kgs and sold it for Rs. 3 lakh." Although the tweet doesn't mention the name of the fish, some users have identified it in the comments. It is called the Bhola or Bhola Bhetki locally, it is a river water fish found in the region. Giant 280-Kg Stingray Caught by Fishermen in Malaysian River, View Pics of The Rare Monstrous-looking Sea Creature.

So huge, isn't it? If you too are wondering, how the lady would have caught it, a report states she jumped into the water when she saw it floating in the river. It took her much efforts to pull it onto to the riverbank. Locals around helped her to get to the market, where all her efforts definitely paid off. At almost Rs.6200 per kg, she sold the whole fish for Rs 3 lakh. She clearly had good luck on her side.

(The above story first appeared on LatestLY on Sep 29, 2020 08:40 PM IST. For more news and updates on politics, world, sports, entertainment and lifestyle, log on to our website latestly.com).