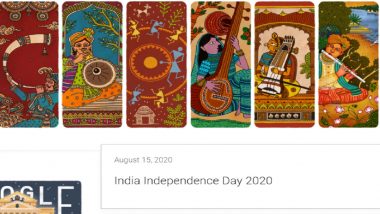 New Delhi, August 15: Google greeted netizens in India on the Independence Day 2020 with an artistic doodle. The landing page of the search engine giant displayed an artwork which reflected the cultural heritage and musical diversity of India. On clicking the same, the users are directed to another webpage which explains more about the work of art. Happy Independence Day 2020 Greetings: WhatsApp Stickers, GIF Image Messages, SMSes, Patriotic Quotes And Thoughts on India's Freedom to Share on 15th August.

The six frames, as seen in the doodle, showcases paintings which commemorate the respective genre of Indian music. The illustration has been designed by Sachin Ghanekar, an artist residing in Mumbai. The doodle was used by Google today as the day marks the 74th year since British ceased control of the Indian territory and India was declared as an independent and sovereign nation.

"Featured in the Doodle artwork are several iconic Indian folk instruments, including the tutari, shehnai, dhol, veena, sarangi and bansuri. From the versatile double-reeded shehnai to the resonant stringed sarangi, these instruments are but a few that make up India’s rich musical legacy, which dates back over 6,000 years," it further added.

The marquee event of 74th I-Day celebrations would be the hoisting of tricolour at Red Fort by Prime Minister Narendra Modi. The Indian PM would also make his seventh consecutive annual address from the ramparts of Red Fort. The ceremony this year, however, would be overshadowed by COVID-19 pandemic as the stream of attendees seen each year would not be present.

(The above story first appeared on LatestLY on Aug 15, 2020 12:14 AM IST. For more news and updates on politics, world, sports, entertainment and lifestyle, log on to our website latestly.com).