Olive Ridley turtles often swim to the beaches of Indian coast where they have nesting grounds in Gujarat and near Rann of Kutch, close to the maritime boundary with Pakistan. 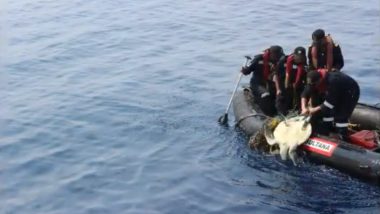 The Indian Coast Guard (ICG) carried out a rescue mission last week along the maritime boundary with Pakistan to save a vulnerable and endangered Olive Ridley Turtle. It had got entangled in a net and was saved by officials who released her later into the Arabian Sea. ICG posted the rescue video on Twitter showing the coast guard sailors using an inflatable boat to save the turtle by cutting off the net strings that had tangled the turtle. An ICGS vessel can be seen in the background. Over 4 Lakh Endangered Olive Ridley Turtles Spotted at Gahirmatha Beach in Odisha (See Pictures)

ICG tweeted the rescue video with the caption, "In a unique Rescue Operation #CoastGuard Ship rescued a worldwide Vulnerable & Endangered #OliveRidleyTurtle entangled in a net at sea off Indo-Pak #MaritimeBoundaryLine & released her into the sea." Olive Ridley turtles are sea turtles which are found in warm and tropical waters. They often swim to the beaches of Indian coast where they have nesting grounds in Gujarat and near Rann of Kutch, close to the maritime boundary with Pakistan. Olive Ridley Sea Turtles Nests in Mumbai: Know More About the Species and Other Turtle Nesting Spots in India.

#WATCH Indian Coast Guard carried out a rescue mission on April 24 along the maritime boundary with Pakistan where they saved a vulnerable and endangered Olive Ridley Turtle entangled in a net at sea and released her into the Arabian Sea. pic.twitter.com/F6l9wUfPn1

The Indian Coast Guard had launched 'Operation Olivia' to support forest officials under provisions of the Marine Fishing Regulatory Act of Odisha last year. The operation which became active on November 1, 2018, continued to May 31, 2019. The operation was introduced as there is a major threat to the Olive Ridley turtles due to fishing activity along the coast of Odisha. The Indian Coast Guard has been undertaking these measures since the past 20 years to prevent the death of Olive Ridley turtles from illegal and unregulated fishing. According to WWF, there are about eight lakh plus female Olive Ridley turtles in the wild today. They are often hunted for their eggs and meats.

(The above story first appeared on LatestLY on Apr 29, 2019 05:10 PM IST. For more news and updates on politics, world, sports, entertainment and lifestyle, log on to our website latestly.com).