Is Ice Cream Pav Gujarat's Answer to Mumbai's Vada Pav? Video of This Weird Food Combination is Going Viral As Twitterati Wonder 'WHY GOD WHY?' 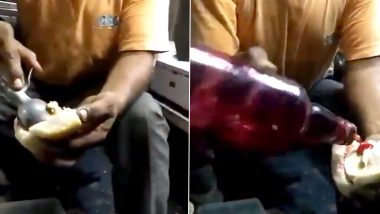 Vada Pav, Bhaji Pav or Dabeli are some of the instant snacks that people relish of bakery buns. But have you ever thought of chomping on cold ice-cream within a bakery bun? A food stall in Gujarat is selling ice-cream pav with flavours that are used on ice Gola! A video of this weird food combination has been shared on Twitter as Gujarat's answer to Mumbai's popular snack Vada Pav and netizens are disgusted with the idea. The video is going viral as people try to decipher why would someone want to even have this. But there are some who think it might be a good combination. Gulab Jamun Pav? Picture of Yet Another Weird Food Combination Will Kill Your Hunger!

Vada Pav is a quintessential Maharashtrian snack and there is no way you'd have it any other way. But it is not novel to come across some of the most weird food combinations on social media. People often post pictures pairing two food items which definitely do not go together and then begins the name calling and tagging it a crime. Similarly, now a Twitter user named Sahil Adhikaari posted a video of a food stall in Gujarat which serves a scoop of ice-cream within a bakery bun, topped with liquid flavours that are usually served on ice gola. The video has got most people disgusted, who wonder why would anyone even try this! The video is going viral. Do You Know Indori Pizza Comes With Sev as Topping? While Some Foodies Call it Crime, It's a Delicacy in Indore (Check Pics).

Umm, what do you think, want to give this a try? Twitterati has given it a thumbs down already, barring some who would like to try it out.

The Expressions to Watch This Experiment

Many others called it a sin. Someone who has tasted it once also shared that it tastes awful. Well, we are not surprised. Lovers of Vada Pav would be rightly outraged with this comparison even. If you can simply enjoy ice-cream why would you have it with a pav?

(The above story first appeared on LatestLY on Sep 15, 2020 06:08 PM IST. For more news and updates on politics, world, sports, entertainment and lifestyle, log on to our website latestly.com).