The phrase "2020 US election results" is being googled the most today with Joe Biden and Donald Trump having a cutthroat competition. But hey, Kanye West! Internet is totally buzzing with Kanye West funny memes and jokes ever since he admitted defeat in the US presidential elections. 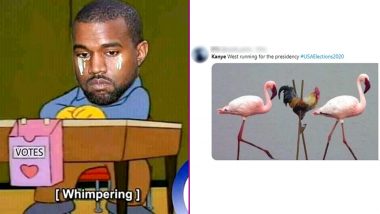 The phrase "2020 US election results" is being googled by almost everyone today with Joe Biden and Donald Trump having a cutthroat competition. But hey, Kanye West! Internet is totally buzzing with Kanye West funny memes and jokes ever since he admitted defeat in the US presidential elections. However, some fans are still wondering about the 60k people who ACTUALLY voted for him. He definitely has a lot of lovers and some of them were even making scenarios of how Kim Kardashian would look, as the first lady of US aka FLOTUS. Well, now that dream has taken a break. People cannot stop sharing hilarious Kanye West memes and jokes, some of which also include the rapper's iconic smile.

You'll be surprised to know (or maybe not) the singer and fashion designer voted for the first time this year. Yes, the year when he decided to run for president. The year 2020 is FR one heck of a year. He tweeted that he was "voting for the first time in my life for the President of the United States, and it’s for someone I truly trust ... me." Well, at least he tried. Netizens have hilarious reactions. While some are lauding his determination, some are sympathising with him. But most are surely laughing under their breaths because... yk we rather not go there.

we’re gonna have a serious talk when all this is over, because you had no business doing what you did bitch @kanyewest pic.twitter.com/uOBBIgRlfZ

Can we all take a minute and think that 60,000 Americans wasted their vote for Kanye West.#Elections2020 pic.twitter.com/lHasoaof3o

Talk About Him Please

homie got left in the dust pic.twitter.com/JoRnPkOqoh

The first time you've ever voted and you vote for yourself. pic.twitter.com/vRbiYvx7cX

These memes are hysterical and they won't stop coming in. Kanye West voted for himself as the next U.S. president after a long-shot campaign marked by erratic statements and speculation that he might siphon some Black votes from Democrat Joe Biden. He even appeared to concede his 2020 bid had ended without failing to mention that his quest was not over. He posted a picture of himself in front of an electoral map saying “WELP KANYE 2024.” He was on the ballot in 12 US states, including Arkansas, Colorado, Idaho, Iowa, Kentucky, Louisiana, Minnesota, Mississippi, Oklahoma, Tennessee, Utah and Vermont. "I am campaigning to be the next President of our great country -- not Vice President," Kanye had earlier said in a statement.

(The above story first appeared on LatestLY on Nov 05, 2020 01:44 PM IST. For more news and updates on politics, world, sports, entertainment and lifestyle, log on to our website latestly.com).